Making a difference at a young age 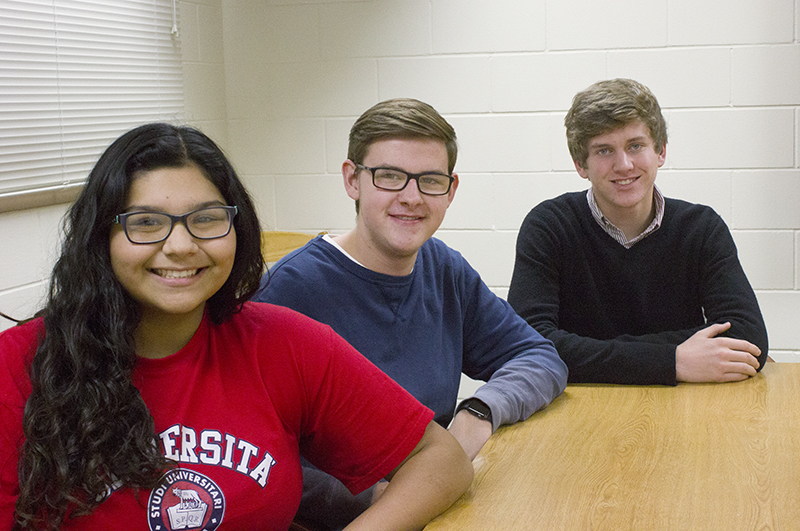 While many high school students may be thinking of college and leaving their hometown, three Albert Lea High School students have been participating in an initiative to help their community grow.

The three honor students landed on a committee to develop self-guided historic walking tours that would include QR codes and selfie stations in the downtown district and Fountain and Albert Lea lakes. The tours would link to an article or an audio piece explaining history and other information about the site.

“I think that’s a great idea,” Nelson said of the walking tour. “I’m sure people in the community will love doing that.”

Lopez said the students chose to be a part of the self-guided walking tour because of its relevance.

Ehrhardt said longtime residents will be able to learn more about the history of the downtown district.

The three heard about the idea through their involvement in the National Honor Society.

“We thought it sounded like a fun way to get involved with the community,” Nelson said.

Lopez said the Idea Splash gave her the perfect opportunity to help the community.

“I just wanted to be more involved,” she said. “I wanted to make a difference.”

Lopez has lived in Arizona and California but said Albert Lea was unique.

“It’s a nice little area,” she said. “It’s family-oriented here. It’s more calm and peaceful than over there.”

She volunteers at a number of local organizations, including nursing homes, churches and the Freeborn County Humane Society.

Although she plans to move to California and become a registered nurse after graduation, Lopez said she could return.

Nelson said the Idea Splash helped him realize how special of a community Albert Lea is.

“There’s a great sense of community in Albert Lea, and there’s a lot of beauty with the lakes,” he said.

Ehrhardt said the Idea Splash gave him an opportunity to listen to ideas and to be involved with a community he loves.

“It seemed like a good way to make an impact outside of the school in the community,” he said.

Ehrhardt and Nelson are both heavily involved in after-school activities, and all three are in Link Crew.

Ehrhardt and Nelson participate in show choir, chorale and caroliers that perform at different functions in the community.

Caroliers perform during the holidays for community functions. Members are expected to sight-read and learn their own music quickly. They wear traditional Victorian outfits provided by the school.

Ehrhardt is a soccer and tennis player who volunteers some of his time with the Albert Lea Youth Soccer Association as an assistant coach and also helps maintain soccer fields.

Nelson is the vice president of the student council and volunteers at St. Theodore Catholic Church.

Ehrhardt and Nelson are both planning on attending college but are unsure of where.

Lopez is a softball player.

Volunteering in the community gives them a chance to make a broader difference than in the classroom or after-school activities.

“In high school you get out of it what you put into it,” Ehrhardt said. “I feel it shouldn’t just be about getting good grades and playing sports, it should be about making a difference.”

“It’s more fun and fulfilling when you get to put work into it,” he said.

What motivates you to make a difference in the community?

“I just wanted to be more involved. I wanted to make a difference.’ —  Meliza Lopez

“In high school you get out of it what you put into it. I feel it shouldn’t just be about getting good grades and playing sports, it should be about making a difference.” — Sam Ehrhardt

“It’s more fun and fulfilling when you get to put work into it.” — Ryan Nelson