Man to serve 4 years for assault

He struck woman in face with a kitchen knife

Javier Manuel Rodriguez, 30, was given credit for 152 days served. He will serve his sentence at the Minnesota correctional facility in St. Cloud. 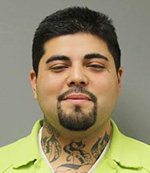 The sentence is in connection with an assault in January in Albert Lea.

Rodriguez was charged with striking his girlfriend with a knife.

According to court documents, an officer was dispatched to a residence in Albert Lea Jan. 11 on a report of a domestic assault. Upon arriving, the officer spoke to the alleged victim who claimed Rodriguez had assaulted her two days prior.

She reportedly had bruising on both of her eyes and an abrasion near her left eye, and claimed the abrasion was caused when Rodriguez hit her in the face with a kitchen knife. According to court documents, she claimed the injuries were a result of being beaten, head-butted and slashed in the face with the knife.

Rodriguez claimed when he pleaded guilty that he did not remember striking her in the face with the knife, noting he was drunk and in a rage at the time of the incident.

He was originally also charged with third-degree assault, felony domestic assault and felony violation of an order for protection.