Funeral service will be at 10:30 a.m. Wednesday at Immanuel Lutheran church in Scarville, Iowa. The Rev. Randy Baldwin will officiate. Visitation will be from 4 to 7 p.m. today at Mittelstadt Funeral Home in Lake Mills, and again one hour prior to the service at the church. 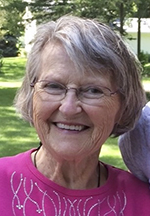 Burial will take place at Immanuel Lutheran Cemetery in Scarville.

Marilyn was born Jan. 3, 1942, to Ruby and Rueben Howard near Renwick, Iowa, and grew up in the Scarville and Lake Mills area. Marilyn married Russell Smidt in 1960 and lived near Silver Lake, Iowa, where they farmed and worked outside the home, raising three daughters: Deb, Donna and Darla. In 1980, Marilyn married Richard White and gained two stepdaughters, Anna and Cecelia.

Marilyn not only worked on the farm, but also worked outside the home in various industries over the years, including Streaters Industries in Albert Lea, where she prided herself on being one of the first women to run a forklift in a union shop; and later at ADC Telecommunications in Le Sueur, until she retired. Ever the entrepreneur, Marilyn was always thinking of additional ways to earn extra money for fun things for her family, like motorcycles or a piano or a camper or extra Christmas presents by making and selling lefse or crafts. She was always thinking of the next big idea.

Family was most important and Marilyn enjoyed gathering everyone at her home and spending time with them. She enjoyed making special memories with her children, grandchildren and great-grandchildren. A woman of many talents, Marilyn could whip up a multi-course meal in minutes and loved to feed the masses. She always tried to remember what was liked by everyone and would try to make their favorites at family gatherings. She not only enjoyed cooking and baking, but also excelled in sewing, quilting, knitting, crocheting and crafting.  There was always numerous projects under construction under her roof.

Marilyn is survived by her daughters Deb (John) McDonald of Duluth, Donna (Mike) Hengesteg of Lake Mills and Darla (Mike) Jaycox of Rochester; stepdaughters Anna (Gary) Miller of St. Peter and Cecelia (Dan) Schueler of Le Center; and many grandchildren and great-grandchildren.

She was preceded in death by her parents; sister, Marcia Michel; and her husband, Richard White.

Online condolences can be left at www.mittelstadtfuneralhome.com.