Intern hopes to attend the University of Iowa for journalism

Describing herself as “scatter-brained,” Wangen took part in her school orchestra, marching band, newspaper, mock trial and even found time for the musical. Along with her busy schedule, Wangen is a driven individual, hoping to study journalism and political science at the University of Iowa in fall 2017. 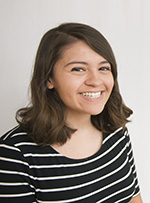 In her free time, Wangen enjoys abstract painting, but also likes to hang out with friends. For Wangen, however, it is her passion for the viola that takes the cake. Starting lessons right before the sixth grade, she likes to practice three to five times a week depending on the time of year. She plans to pursue orchestra at the University of Iowa.

Journalism is another priority in her life, and whether it is at the school newspaper or at the Tribune, she knows it is where she belongs. One of her goals in the coming years is to join the team of writers at the University of Iowa’s school newspaper.