A Minneapolis man was placed on unsupervised probation for one year Tuesday in Freeborn County District Court for fleeing a peace officer by means other than a motor vehicle.

Matthew James Rowand, 32, was sentenced to 90 days in jail. Seventy-eight days were stayed, and he was given credit for 12 days served for the misdemeanor.

Rowand and Elana Lenze of Eagan were charged after they reportedly led officers on a chase that exceeded 60 mph in December in Albert Lea. 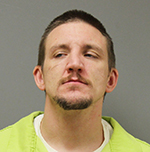 After an officer learned that a license plate of the car the two were driving did not match the vehicle, their vehicle reportedly pulled out of a parking lot and on North Broadway.

The vehicle reportedly continued north on Bridge Avenue, crossing the center line multiple times and traveling at a high speed, estimated at more than 60 mph, more than double the 30 mph speed limit on the south portion of Bridge Avenue.

The vehicle reportedly eventually came to a stop in front of a residence just north of the intersection of Bridge Avenue and Hawthorne Street.

The vehicle had been reported stolen in Minneapolis Nov. 28.

Rowand was originally additionally charged with fleeing a peace officer in a motor vehicle and receiving stolen property, but those charges were dismissed.