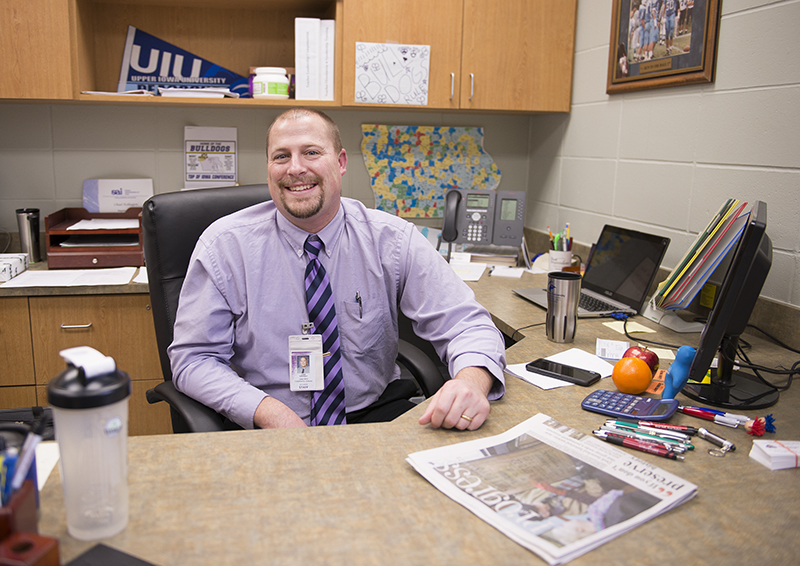 Chad Kohagen, current Lake Mills superintendent, will be stepping down from his position in June. - Colleen Harrison/Albert Lea Tribune

New Lake Mills leader says he is impressed with city

LAKE MILLS — The Lake Mills school district is looking toward to the future, with the help of new superintendent Chad Kohagen.

Kohagen officially started with the district July 1, 2015. His last 16 years were spent in Oelwein, Iowa, eight as a high school principal, and the rest as a kindergarten through eighth-grade physical education teacher and then as an assistant principal and activities director. He said he originally got into the education field because he enjoyed working with children, and P.E. was his favorite class growing up.

“What better job to have than to play games and teach motor development?” he said. “Teaching through movement is a big thing for me.”

When he first looked into interviewing for the Lake Mills position, Kohagen said he and his wife were looking for another small community to raise their children in. He and his wife, Casey, have four children: one 10-year-old and 7-year-old triplets. Kohagen’s wife was familiar with Lake Mills as she had previously worked with West Hancock schools, and had nothing but positive things to say about the area. After Kohagen first interviewed for the position in March 2015, he agreed with his wife’s impression of the town.

“I was impressed as soon as I came into the community,” he said. “Lake Mills is one of those communities people like to raise their families in.” 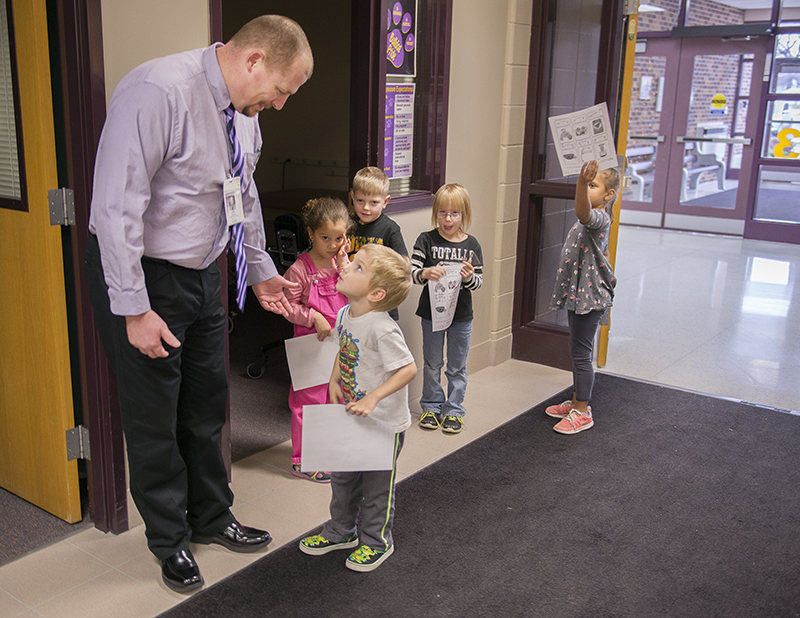 Kohagen first got his start in education as a kindergarten through eighth grade physical education teacher. He then went on to coaching sports, being an assistant principal and activities director and then a high school principal before coming to Lake Mills. – Colleen Harrison/Albert Lea Tribune

Kohagen said he drove around the town when he first interviewed and appreciated the appearance of the community and how it seemed its inhabitants took pride in the town as a whole. He also liked that, even for a smaller town, it seemed to have an ideal amount of industry going for it.

Since becoming a member of the community, Kohagen said he likes how everyone seems to have a “We’re in this together” kind of mentality.

“Everyone seems to be on the same page and open to new ideas,” he said. “They’re very open to moving forward.”

That open mentality will help with the school district’s plans for the future, Kohagen said.

Something the district is working toward is making its schools compliant with the one-to-one initiative. The initiative is a push for each student to have some sort of device to take to all their classes and to take home with them, such as an iPad or a Chromebook, among others.

According to Kohagen, Iowa is second in the country in having one-to-one schools. He said he thought Maine was first in the number of schools following the initiative.

Kohagen said, while the district isn’t completely one-to-one yet, it is doing more with the Google platform and has a panel putting together a plan on how to reach the district’s technology goals. The panel is made up of school administrators, teachers and Internet providers. Kohagen said the group makes its decisions together and relies on each other’s input and guidance to find the best approach for the school district and its students. He said there isn’t a time frame yet on when the district plans to be completely one-to-one, as it’s still working on infrastructure and narrowing the focus of its plan.

Something else helping the district move forward is the statewide Teacher Leadership and Compensation system. According to Kohagen, the system promotes teachers into leadership by providing more resources for instructional coaching, training, substitutes and opportunities for teachers to go into other classrooms — all of which the state potentially provides financial compensation for. Kohagen said $150 million is earmarked each year by the Teacher Leadership and Compensation system to go toward different schools that apply for the grant by submitting a detailed plan of what the system resources would fund and how they’d be applied.

In addition to updates on the technology and education fronts, Kohagen said he is interested in pursuing the possibility of solar panels on the school buildings. If they could significantly provide energy and make the buildings more viable, they are something he’d like to look into down the road.

So far, Kohagen said the community has been receptive and extremely encouraging with all of the education proposals and initiatives.

“I’ve been very impressed with the community as a whole,” he said. “We all look out for each other.”

8 – Years he spent working as a high school principal in Oelwein.

Why does Kohagen live in Lake Mills?

Kohagen and his family moved to Lake Mills over summer 2015, after Kohagen accepted the superintendent job in July 2015. He said he and his wife wanted a small, close community to raise their children in, and they think they’ve found it in Lake Mills.