Muhammad Ali passes away at the age of 74

Muhammad Ali, the man considered the greatest boxer of all time, died late Friday at a hospital in Phoenix at age 74. He was battling respiratory problems.

Ali inspired millions by standing up for his principles during the volatile 1960s and by always entertaining — in the boxing ring and in front of a microphone.

Cassius Clay (Ali’s given name) won a gold medal at the Rome Olympics in 1960. He wanted more: a professional heavyweight championship. He arrived in Miami in October to work with legendary trainer Angelo Dundee. Dundee, who died in 2012, recalled the first day Clay showed up.

“Bounding up the steps of the Fifth Street gym, and the steps were pretty rickety, you know, all wood. Bouncing up, he said, ‘Angelo, line up all your bums. I’m gonna beat ‘em all,’ “ Dundee said.

‘King of the world’

Clay was 18: bounding, fearless, leading with his mouth.

“I’m not only a fighter. I’m a poet; I’m a prophet; I’m the resurrector; I’m the savior of the boxing world. If it wasn’t for me, the game would be dead,” he said.

Young Clay made boxing an art form. He was an original, a heavyweight who didn’t move around the ring — he danced. He’d thrill the crowd with his quick scissor-step shuffle. On defense, he’d slip and slide, Dundee said, and then flick that jab.

Float like a butterfly, sting like a bee; rumble, young man, rumble. Boxing reporters never had so much fun.

As the mouth roared, the victories started piling up, all of it prelude to a 1964 battle against the big, bad bear: heavyweight champion Sonny Liston.

Liston was a fearsome opponent. Nobody believed the young Ali had a shot. But after six rounds, Liston was done. He didn’t come out for the seventh, and Clay was the new champion.

But the 22-year-old was just getting started.

After the Liston fight, Ali revealed he was a member of the black separatist movement Nation of Islam. He wanted to be called Muhammad Ali, a name he said was given to him by the group’s leader, Elijah Muhammad.

Muhammad, the Nation of Islam leader, preached that integration and intermarriage were wrong and that white people were devils. It was an idea Ali defended in a 1971 TV interview.

“I’m gonna look at two or three white people who’re trying to do right and don’t see the other million trying to kill me? I’m not that big of a fool, and I’m not going to deny it,” he said. “I believe everything he [Muhammad] teach, and if the white people of a country are not the devil, then they should prove they’re not the devil.”

one another. Cassius Clay is disgracing himself and the Negro race.”

To others, Ali became a loud and unapologetic symbol of black pride.

The Rev. Kwasi Thornell of Washington, D.C., was a teenager when Ali burst onto the scene.

“There was a great deal of excitement in seeing that because that was a boldness that many of us did not know,” says Thornell, who is African-American. “We were more encouraged by our parents to just go along with the system and not be bold and bodacious, as [Ali] was.”

Ali’s boldest move — and most controversial — came in 1967. At the height of the Vietnam War, he refused induction into the U.S. military, saying, “I ain’t got no quarrel with them Viet Cong.”

Some called him a traitor. For those in a growing anti-war movement, Ali was a hero who paid a significant price. He was convicted of draft evasion, and though he avoided jail time, he was stripped of his heavyweight title and banned from boxing at the age of 25, just as he was entering his prime. It would be more than three years before Ali returned to the ring. 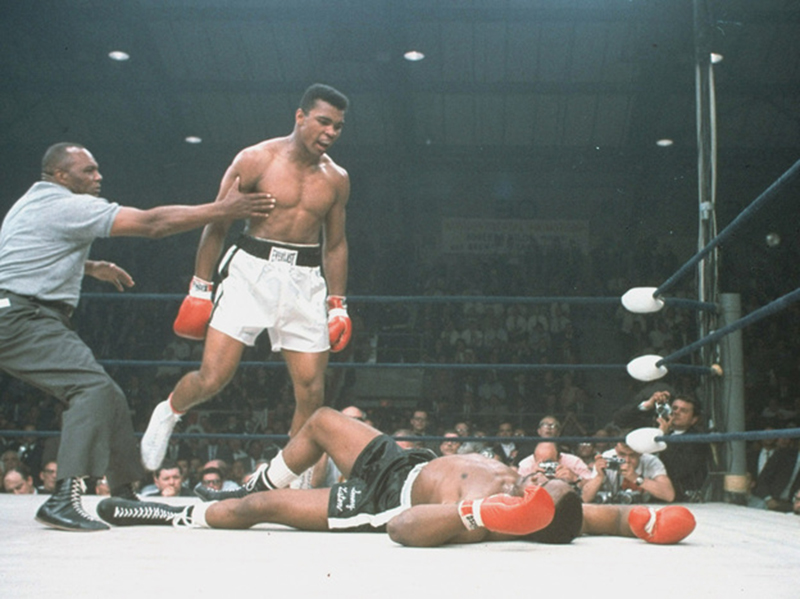 Muhammad Ali is held back by referee Joe Walcott after knocking out Sonny Liston in the first round of their championship bout in Lewiston, Maine, on May 25, 1965. AP via MPR News

Following his exile, Ali squared off against Joe Frazier, who became heavyweight champion in Ali’s absence. The March 1971 showdown was billed as the fight of the century.

Frazier won, handing Ali his first professional loss. It was also the first of three epic bouts between the two men. Frazier, with his boxer’s mashed face and snorting-bull style in the ring, could never equal Ali’s finesse and skill as a fighter. Nor could he match Ali’s wit, which often turned cruel when the subject was Frazier.

It was theater to Ali. But in a 2007 interview, Ali biographer Thomas Hauser said the words and frequent taunts were like broken glass in Frazier’s stomach. It’s one of the reasons, Hauser said, that even late in life, Frazier harbored ill will toward Ali.

“Even though Muhammad said to me that if God ever called him to a holy war, he wanted Joe Frazier fighting beside him,” Hauser said.

Undoubtedly, sports announcer Howard Cosell would have done the holy war’s play-by-play, as he did for many of Ali’s fights. The two men had a symbiotic relationship. Their interview sessions were more like hilarious jousting matches, with Ali needling the pedantic former lawyer, always threatening to tear off Cosell’s obvious toupee.

When it came to boxing IQ, none was higher than Ali’s. In 1974, against the menacing George Foreman, Ali used a tactic called the “rope-a-dope.” He stayed on the ropes, covering up, letting Foreman punch himself out. Then Ali struck quickly, knocked out Foreman and became champion a second time.

A year later, “The Thrilla in Manila” was the final fight in the Ali-Frazier trilogy. It was an awesome and horrible slugfest that ended with Ali winning, but admitting afterward, “It was the closest to death that I could feel.”

“This is too painful. It’s too much work. I might have a heart attack or something. I wanna get out … while I’m on top,” he said.

It would have been the perfect time to stop. But Ali kept fighting six more years. In the early 1980s, he was diagnosed with pugilistic Parkinson’s syndrome.

His last big public moment came in 1996, when he lit the flame at the Atlanta Summer Olympics. Shaking, his face frozen by a Parkinson’s mask, this was a new generation’s image of the man called the greatest of all time. But the sadness was mixed with global love.

Ali was the rare and perhaps only person who could go anywhere — Fifth Avenue in Manhattan, a marketplace in Latin America — and people would stop and point and smile.

In his life, he traveled from a boxer’s cruelty to kindness. A man who stood up and shouted out for his principles ultimately embraced the quiet principle of spirituality. But in later years, his words muted by Parkinson’s, Ali was asked if he’d do it all over exactly the same, even if he knew in advance how he’d end up. The answer: You bet I would.