Funeral services for Oscar Ausen, 89, of Hartland will be at 10 a.m. Saturday at West Freeborn Lutheran Church. The Rev. Mark Hillmer will officiate. Interment will be at West Freeborn Cemetery. Visitation will be from 4 to 7 p.m. Friday at Bayview/Freeborn Funeral Home and one hour prior to the service at the church on Saturday. Online condolences are welcome at www.bayviewfuneral.com.

Oscar Ausen was born April 19, 1927, the 11th of 12 children of John and Caroline (Hallum) Aasen in Manchester Township. He was baptized and confirmed at West Freeborn Lutheran Church. He attended country school District 21 through the eighth grade and graduated from Freeborn High School in 1945. 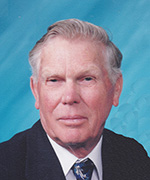 He married LaVaun Vint at West Freeborn Lutheran Church on Aug. 25, 1948. They farmed together west of Hartland for 68 years. They had five children. Oscar loved to farm and he was proud of his Holstein cows. He milked cows for 40 years. He was president of Hartland Creamery until it closed and was then president of Clarks Grove Creamery. He was a lifetime member of West Freeborn Lutheran Church, where he sang in the choir, held many offices and volunteered many, many hours. He also belonged to Sons of Norway. He enjoyed woodworking, being with family and talking with everybody. Coffee and afternoon lunch were very important to him.

He loved his wife, LaVaun; his family, his home, his church and farming.