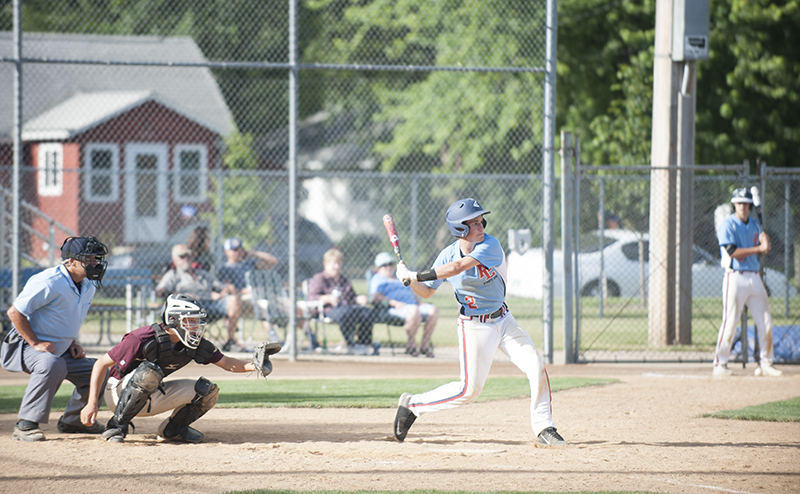 Albert Lea’s Jacob Bordewick swings at a pitch in the sixth inning of Thursday’s game. Bordewick reached on a two-run error that gave Post 56 the lead for good when he sent a ground ball to third base. Jarrod Peterson/Albert Lea Tribune

On a gorgeous evening, Albert Lea Post 56 hosted the Rochester RedHawks in a doubleheader Wednesday.

The first game saw Post 56 dig themselves an early hole, and then climb back into the game in the later innings to pull out the 6-4 victory.

The second game was the opposite. Albert Lea jumped out to an early lead, only to lose it in the middle innings in a 5-4 defeat.

Chris Enderson got the start in the first game.

He walked the first batter he faced, but was able to get out of the inning facing just three men.

Albert Lea struck for the first run of the game in the second inning when Parker Mullenbach alertly scored on a double-steal attempt.

As soon as he saw the catcher make a throw to second base, he bolted for home, and was safe without a tag attempt.

But Enderson would run into trouble immediately in the next inning.

It started with an error, then a pair of one-out walks to load the bases.

The pair of walks were greeted by a pair of two-run singles to give Rochester a 4-1 lead.

That would be all Enderson would surrender, but that would also be the end of his day.

Taylor Heavner came in to pitch the fourth inning, with his team still trailing by three runs.

He struck out the side in the fifth to get Post 56 back into the dugout.

Still down three, Blake Simon smashed a one-out double to right center. Then, with two outs, Mason Hammer ripped a single  over the pitcher’s head. Simon would come in to score, but Hammer was easily thrown out at second to end the inning.

Taylor Heavner gets a strikeout looking

It looked like Rochester was going to extend its lead in the top of the sixth. After starting the inning with a walk and a single, the Red Hawks sacrificed both runners to second and third.

With one out, Heavner got a pop out and then another strikeout to get out of the jam.

Jake Thompson’s leadoff homer in the sixth also helped. He took it deep over the right field fence on the first pitch he saw to pull Post 56 to within one run. 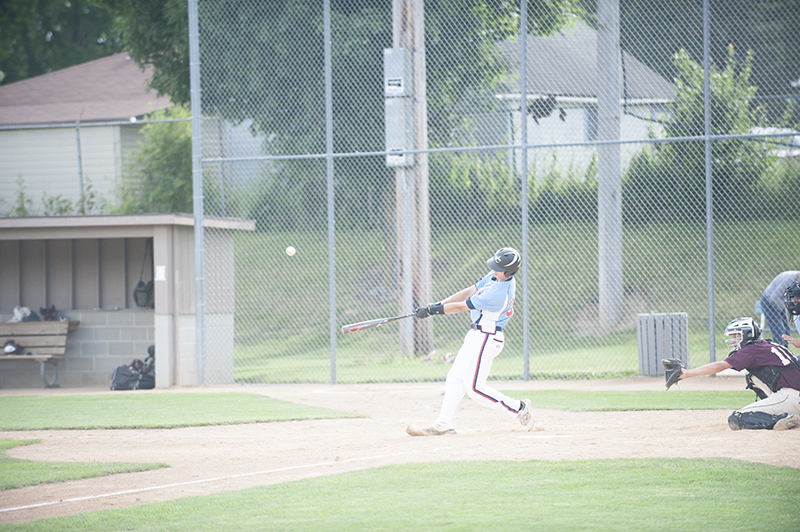 Post 56’s Jake Thompson launches a fly ball in an at-bat in the third inning of Albert Lea’s game against Rochester Thursday evening. He later homered in the sixth inning.

Sam Moyer reached on a error and Parker Mullenbach walked. After a groundout, Jacob Bordewick stepped into the box with runners on second and third.

He hit a routine grounder to third. The third baseman scooped it up, but then made a low throw that skipped past the first baseman. Moyer scored, then Mullenbach came in on the error and, just like that, Post 56 had the lead.

Albert Lea would tack on another run when Bordewick scored on Simon’s infield single.

With his adrenaline still running high, Bordewick, as he did for the varsity team late in the year, came on for the save opportunity.

Just like he did during the varsity season, he shut the door on the Redhawks. He struck out the first batter, then allowed a walk. But got the next batter on a game-ending double-play.

In the second game, Albert Lea struck for two runs in the first inning to go up 2-1.

But Rochester would respond with a run each in the third and fourth innings, and then two more runs in the fifth inning.

That would prove to be too much for Post 56 to overcome, as they weren’t able to erase the deficit like they did in game one.

Thompson drove in two runs, and Alex Bledsoe and Cody Ball were responsible for driving in the other two runs.

With the split, Albert Lea’s record moves to 8-4 for the season.