Rain halts quest for a title 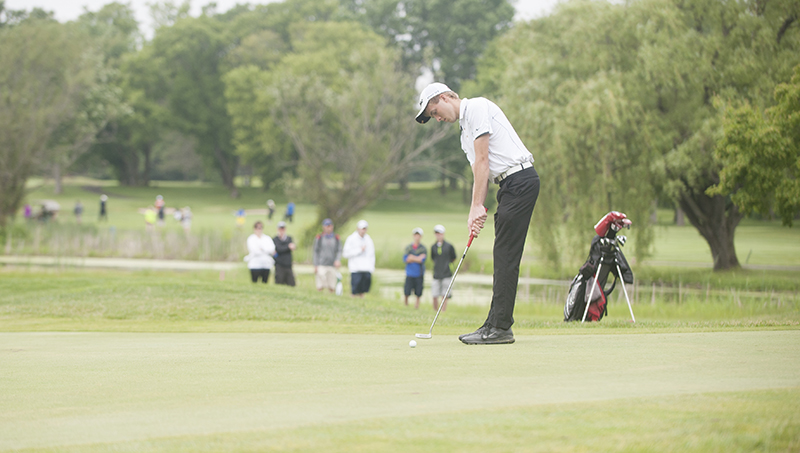 Ryan Pederson attempts a bogey putt on the second hole Tuesday at Pebble Creek Golf Club in Becker. He would end up making the putt. - Jarrod Peterson/Albert Lea Tribune

This year, he was looking to make the championship all his own, as he began play Tuesday at Pebble Creek Golf Club in Becker.

The weather was not on anyone’s side during the opening day of the two-day tournament. Rain and more rain threatened golfers nearly every hour. 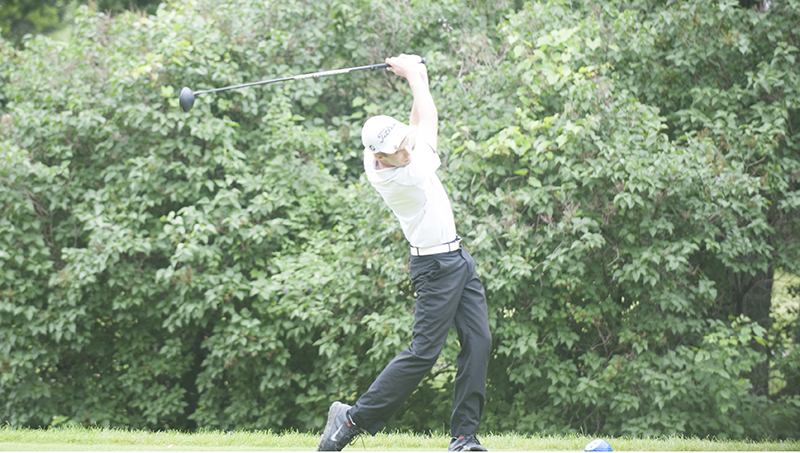 Thankfully, when Pederson teed off, the rain let down. Unfortunately, the rain picked up once he hit the back nine, and play was suspended.

Pederson led off the first hole with a blistering tee shot down the right side of the fairway that landed in the second cut of rough.

It didn’t seem to harm him much, though. He made up for it with an excellent approach shot that left him about 20 feet of work for a birdie. His putt came up just short, leaving him a short tap in for par.

Pederson and company waited nearly 20 minutes to tee off on the second hole, and that might have led to him bogeying the hole. He crushed his drive, again, but it also found the rough on the left side. Later on, a nice chip put him within two feet of the hole to save bogey.

Pederson followed that hole with a bogey on three after his drive found the bunker.

He recovered nicely on the par 3 fourth hole, in which he parred to get back on track.

At the par 5 fifth hole, a hole that stretches nearly 500 yards, Pederson blasted his drive. But again, his drive found the rough. He got all of his second shot and carried it onto the fringe of the green behind the flagstick. He had an opportunity for an eagle and to get back to even par. He gave a great effort on his putt for eagle, but it drifted to the left and trickled past the hole. He recovered to make a nice birdie putt to gain a stroke.

The wind picked up on the sixth hole of the day, making it a difficult par 3 across the pond.

Pederson set himself up nicely with a solid tee shot, but his putter let him down. He would end up making bogey on the hole to drop the stroke he had just gained.

Pederson double-bogeyed the seventh hole, and just missed a birdie putt on the eighth hole.

He finished the front nine with an excellent bogey that could have easily turned into a double-bogey.

Play was suspended while Pederson was finishing his round on the back nine. His last known score had him at +5 on the day.

Pederson resumed his first round this morning, followed by his second round later today.