Shoff files for 4th run to be District 3 commissioner

An Albert Lea man has filed for his fourth time as a candidate for the District 3 seat on the Freeborn County Board of Commissioners. 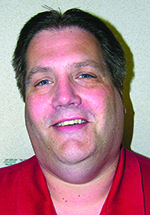 Shoff has been married for nine years and has a 5-year-old son named Peter. He is in the hotel industry and works with marketing and operational consulting.

He said he has lived in Albert Lea for most of his life.

Shoff said he thinks there is a discussion about the future of Freeborn County that needs to take place.

With the outlook on the future looking dismal, Shoff believes now is the time to act.

To start this discussion, Shoff said he wants to incorporate other leaders, as well as the community. He is looking to bring his sense of leadership to the Board of Commissioners as well as his ability to bring people together and communicate with others.

Shoff will face off against incumbent 3rd District Commissioner Jim Nelson, who has a farming and trucking background.