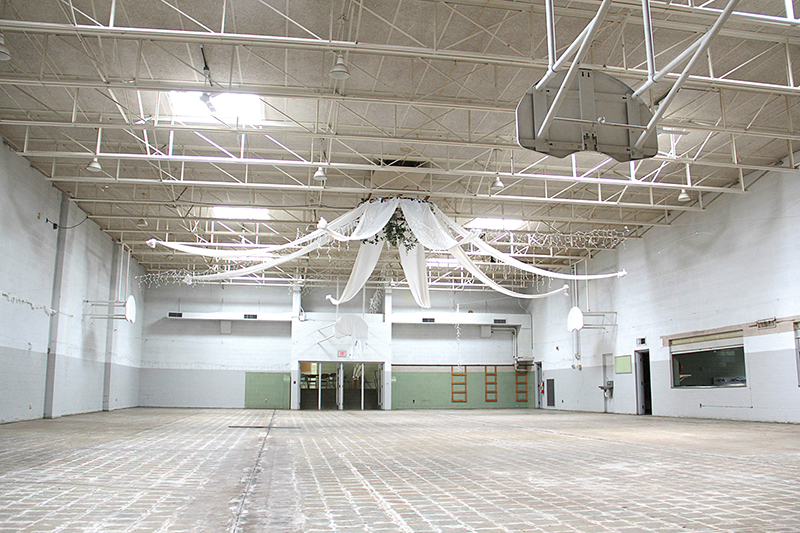 The former Corcoran Center will be converted into the Austin-Albert Lea Special Education Cooperative. Asbestos mitigation is complete and construction will start next month. - Jason Schoonover/Albert Lea Tribune

Icicle lights, white garland and fake vines still hang above the gym and event space of the former Corcoran Center, but the center has hosted its last wedding, as crews have already stripped out old flooring and materials.

Director of Facility Services Mat Miller and the Austin and Albert Lea school districts are already looking ahead to demolition and construction to turn the old Corcoran Center, 2000 Oakland Ave W. in Austin, into the Austin-Albert Lea Special Education Cooperative, which both boards voted earlier this year to form.

“It’s a perfect space for what we’re looking for,” Miller said. “It was an existing building that we can make some relatively minor renovations to and still be functional for the program that we’re looking to put in.”

The districts purchased the Corcoran Center for $4 million earlier this year. The Austin board, which is serving as the finance agent for the cooperative, voted unanimously to approve a base bid from Wagner Construction of Austin for $2.6 million, along with $112,800 in five bid alternates, during a Monday work session.

Miller estimated new construction could have cost at least twice that. 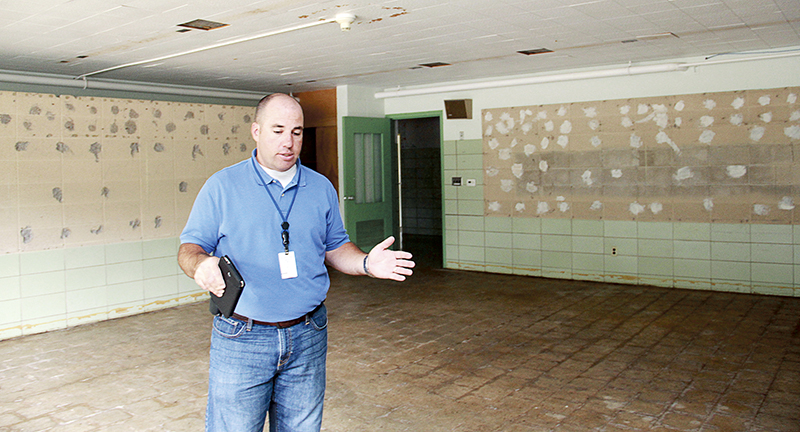 Director of Facility Services Mat Miller talks in a room at the former Corcoran Center that will be converted into a classroom for the Austin-Albert Lea Special Education Cooperative. – Jason Schoonover/Albert Lea Tribune

Work is already underway at the center, as asbestos abatement is complete. Miller expects demolition to start in mid- to late July. Construction should be completed by mid-December before the co-op students start the second semester at the site in January. To start the 2016-17 school year, all Austin students will stay at their current schools.

The building started as a Catholic elementary school before later becoming Apple Lane Child Care, which moved to the Austin Riverland Community College grounds, and the Corcoran Center, which hosted weddings and events.

Given the building’s history, Miller said the transition back to a school should make for a typical interior remodel, as there are no major additions or structural changes.

From the outside, the changes will be almost unrecognizable, aside from some new windows. The district will also cover up any religious identifiers.

The building will have two main wings: a SUN Wing for Students with Unique Needs and EBD Wing for Emotional Behavioral Disorder students.

“We’re essentially gutting the inside, going to reconstruct the inside and then there will be minimal stuff on the outside,” Miller said, noting they’ll do some roof replacement.

The biggest changes will come in the former gym and event center area, which will be converted into the SUN Wing.

Currently, there’s a stage-like area on the far west end of the gym with locker rooms on the far southwest corner. The locker rooms will be removed to build three classrooms, a teacher lounge and a sensory room. The space will still have a gym, but it will be much smaller. That area will also include student restrooms and a staff restroom

“This is going to be a pretty dramatic change,” Miller said. “Where you walk in right now, it’s all open, it will look nothing like this when we get done.”

The kitchen, located just off the gym, will be pretty similar, but the area will include a life skills area where students can learn to laundry, cooking and food preparation.

The old classrooms on the southeast section of the building will be the EDB Wing, which will look relatively similar in structure, though half walls in the eight classrooms will be removed, as will cupboards and shelving as the rooms are revamped.

“Everything will have a fresh look,” Miller said. “Everything’s going to get painted and freshened up.”

The district will also build in focus rooms, which Miller described as a calming cove.

The existing floor will remain in the EBD Wing hallway, but the classrooms will get new tile carpeting. Work will also update the restroom and HVAC systems along with adding fire sprinklers and updating some of the buildings electronics.

“There’s a lot of those code updates that have to happen,” Miller said.

Wheelchairs ramps will also be installed throughout the building to be up to code.

An administration area will be built to the left of north entrance, which will be converted into a secured main entrance and front office. A conference room will be built into the south end of that space, where there’s currently another entrance from the church parking lot.

The church will maintain the parking lot south of the building, and the district will just have parking on the north side of the building. The district plans to fill in a driveway between the Corcoran Center from the church playground, and it be converted to a green space, which was included as one of the bid alternates.