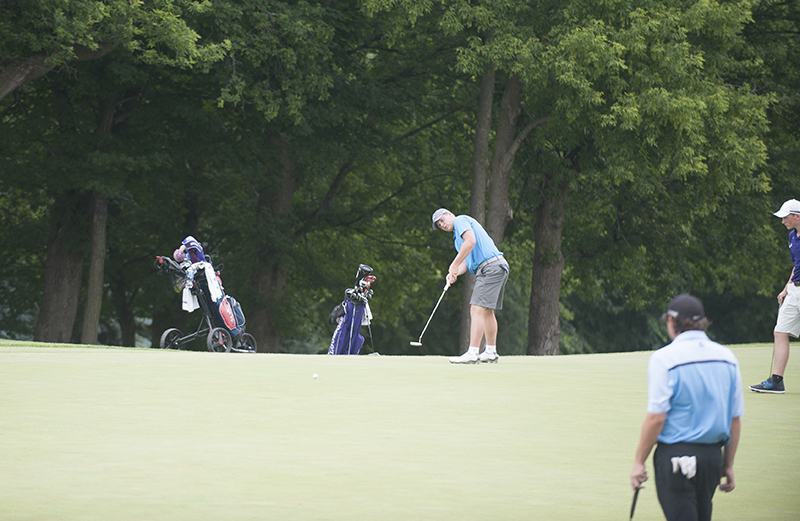 Albert Lea senior Alex Syverson attempts a birdie putt on hole No. 10 during his second round Wednesday at Sand Creek Golf Course. Syverson finished 6th in the state tourament with a total score of 148. Jarrod Peterson/Albert Lea Tribune

JORDAN — The weather conditions were not ideal. The schedule was not normal. But it was the Minnesota state high school league boys’ golf tournament, and everyone had to deal with the same conditions at Sand Creek Golf Course in Jordan.

Thanks to some very poor weather on Tuesday, players on the Albert Lea boys’ golf team were only able to get in a couple of holes on day one.

That meant an early wake-up call and a grind on the second day.

“It was tough to stay in it and focused,” said Tigers captain Alex Syverson. “The pins were in the same place for both rounds, but the course dried out between the second and first round, and that made things a little more difficult.”

The Tigers put together a great effort, but dug themselves too big of a hole in the first round.

Albert Lea finished in eighth place with a total team score of 666.

The Blake School was in command all tournament long and ran away with the team title, posting a score of 589.

Full team results can be found below.

Despite his first round being interrupted Tuesday, Syverson managed to a shoot a 1-under par 35  on the front nine, and finished with a par-72 on the first 18.

Jack Pulley was the other Tiger to join Svyerson shooting in the 70’s, as he pulled into the clubhouse with a 78.

After a couple hours of trying to rest and relax, the Tigers headed back onto the course to see if they could make a run over the final 18 holes.

Syverson kept up his hot play, shooting another 1-under score on the front nine. During the back nine, the heat and the long day started to catch up to him. He finished the final nine holes of his high school career by shooting a 5-over 41 for a total score of 148, and his best finish in his three year’s at the state tournament — sixth.

“It was great to be here,” said Syverson. “It was even better to be here with my teammates. The younger guys were pretty nervous, but I am proud of the way they played and this experience will help for the future.”

The Blake School’s Derek Hitchner won the tournament by 11 strokes. 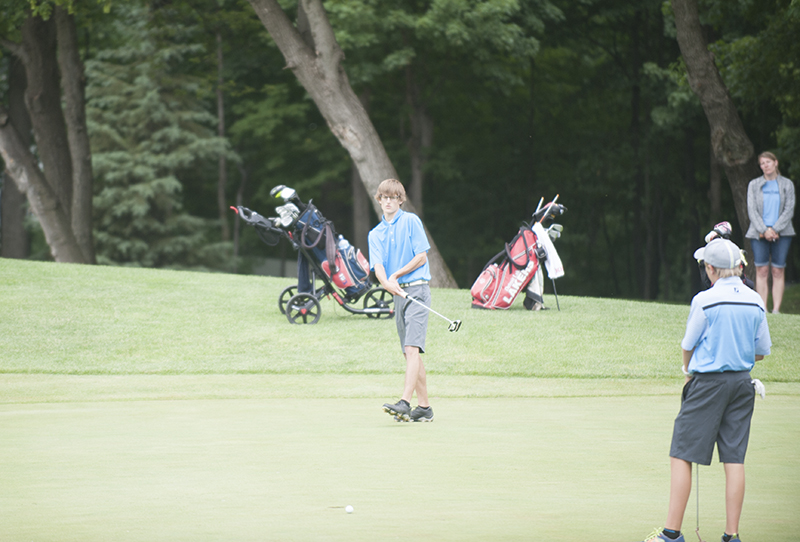 Albert Lea’s Brock Carstens reacts after his birdie putt scoots just past the hole during his second round Wednesday at Sand Creek Golf Course.

Pulley continued his solid play into the second round, too.

After shooting identical 39’s in his first 18 holes, he continued with another 39 on the front nine. His performance dipped a little on the back nine, as he finished with a 42 for an overall score of 159 and a 45th-place finish.

Lundak’s score improved by nine shots during his second round to finish with an 83 and total of 175.

Carstens, Sam Chalmers and Danny Chalmers all played around the where they played in the first round.