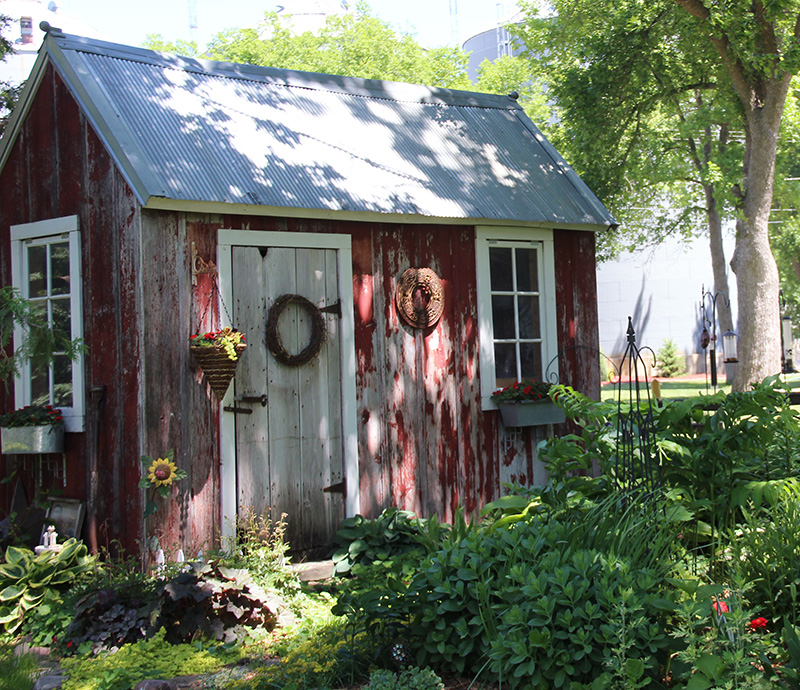 An old shed is in the backyard of one the houses on the tour of homes fundraiser in Alden that benefits Morin Lake Days. The tour on Saturday will showcase five different homes. - Henry Rohlf/Albert Lea Tribune

For the first time in three years, Alden will once again host its tour of homes fundraiser for Morin Lake Days.

Titled as “Alden’s century-old home tour,” tickets will cost $12 per person and are available for purchase by going into Addie’s Floral in Albert Lea or by calling Lori Nelson at 507-251-8964.

The first of the five homes comes from Gary and Lori Nelson. Located at 148 Second Ave. W., the craftsman-style home is exactly 100 years old.

The house was built in 1916 on a plot of land originally entered by former president Abraham Lincoln in 1861, and in 1865 the land was acquired by George M. Barnard for military service.

From 1924 to 1968, the property was owned by First Methodist Episcopal Church. It was used as a church parsonage. The front sitting room was used as a pastor’s office.

In December 1982, the house was purchased by the Nelsons, where they raised four children together. At the time, Gary Nelson was a school teacher and coach in Alden.

The VanEngelenburg and Prescher home

Adjacent to the Nelson home is the second home on the tour, owned by Janelle VanEngelenburg and Troy Prescher.

Located at 145 First Ave. W., the American foursquare style home was built in 1915, making it just one year older than the nearby Nelson home.

The land of the home was entered into the “Book of Original Entries of Government Lands” on July 20, 1861.

At one point, the upstairs of the house was turned into an apartment, where the southeast bedroom may have been the kitchen at that time.

Janelle VanEngelenburg purchased the house in September 1996, and has since completely renovated the kitchen, which required a teardown of a wall and fireplace. The salvaged doors from the fireplace are now a decorative element upon entering the back door. The couple has been able to complete most of the work themselves.

Original woodwork and craftsmanship are present throughout the house, as well as a creative use of space in the updated second floor bathroom.

The third house on the tour is owned by Ron and Colleen Jahnke.

Located at 118 Main St. W., the Jahnke home will be the only home serving garden tea during the tour.

William Morin purchased the land in 1865. It is noted that Morin was the largest land owner in Freeborn County at the time. The Morin family was also prominent in Alden history; the lake in the center of town is even named Morin Lake.

The craftsman style home was built in 1917 by the Hall family, and continues to host original woodwork as well as French-style doors separating the living and dining rooms.

The front porch and back entry still have their original beadboard ceilings. The stairway to the upstairs is unique with access from two separate rooms.

Guests on the tour are welcome to walk through the garden as they enjoy refreshments served in the back of the house overlooking the lake.

The fourth house on the tour is owned by Greg Hitchcock.

The original builder of the home, Edward Beatty, worked as a mortician for Hemmingsen and FM Booth Furniture and Mortuary. But in 1941, Beatty left the business and opened his own funeral home on the first floor of the house.

The Beatty family owned the home until 1954, when it was purchased by Greg Hitchcock’s father and mother, Theodore and Patricia Hitchcock.

As guests enter the home, they will notice two entries to the inside. One enters the front viewing room and the other enters into the residence.

In 2000, the Doyle family bought and lived in the house when it was sold to them. It was brought back into Hitchcock possession when Greg Hitchcock bought his childhood home in 2010.

The home has its original woodwork and hardwood floors throughout, as well as original light fixtures.

The final home of the tour is owned by Jordan and Courtney Janzig.

The two-bedroom farm-style home has seen many generations of Courtney Janzig’s family, the Hemmingsens. Courtney (Hemmingsen) Janzig is currently starting her married life in the home with her husband, Jordan Janzig.

The original Hemmingsen purchase was back in 1923 by Courtney Janzig’s great-great-grandfather, Louis Hemmingsen. He bought it from Anna Christenson.

Better known as “Louie,” Louis Hemmingsen was born in Stege, Denmark, in 1873. After moving to America he eventually settled in Alden. Louie Hemmingsen originated the livery business, which is now known as Hemmingsen Transfer.

The home has been remodeled and upgraded many times through the generations, and many original features can be noticed upon entering the house, as well as the updated kitchen. The small stairway goes to the second floor and to the two bedrooms.

At one point, the house was used as a crafts and flower shop.

The large evergreen tree in the front yard has been there through the generations and is close to 100 years old.