U.S. Olympic swimming team filling out with some new, some familiar faces 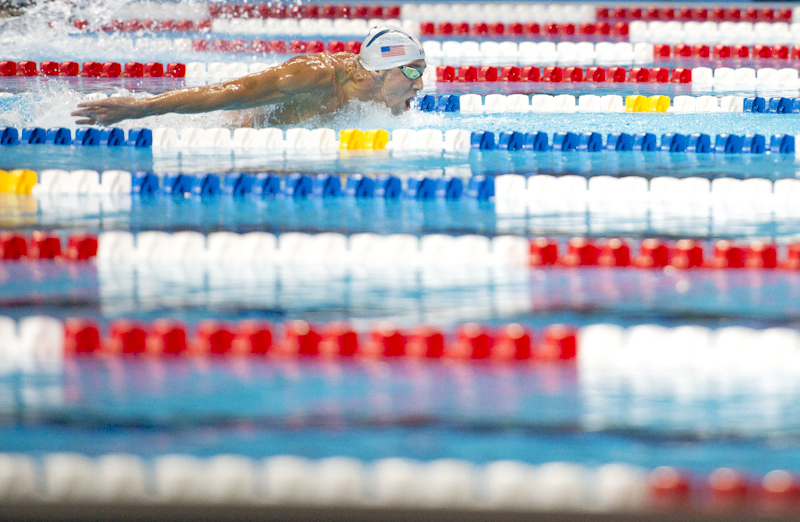 Michael Phelps takes an early lead in the men's 200-meter butterfly semifinals during the U.S. Olympic Trials Tuesday at CenturyLink Center in Omaha, Nebraska. Phelps finished in first place in the event with a time of 1:55.17, advancing to Wednesday's finals. - Colleen Harrison/Albert Lea Tribune

OMAHA, Neb. — One by one, some of America’s biggest swimming stars are going down at the Olympic trials.

Lochte, an 11-time Olympic medalist but slowed by a groin injury, missed out on his second chance to make the team in an individual event with a fourth-place finish in the 200-meter freestyle. There was some consolation: Lochte at least clinched a spot in the 4×200 relay, so he’ll be in Rio.

Franklin can’t say that yet. The bubbly star of the 2012 London Games struggled to a seventh-place finish in the 100 backstroke, denying her a chance to defend the gold medal she won four years ago.

Racing just 23 minutes after qualifying for the final of the 200 free, the 21-year-old Franklin couldn’t pull off the grueling double. She finished nearly a body length behind winner Olivia Smoliga and runner-up Kathleen Baker, who will represent the U.S. in what was once Franklin’s signature event.

“It’s going to be really hard not to be in that (event) this summer,” Franklin said. “But I cannot wait to watch how Olivia and Kathleen do, and I can’t wait to see what they’re capable of.”

The only swimmer to finish behind Franklin was 12-time medalist Natalie Coughlin. The 33-year-old likely missed out on her best chance to make the team in an individual event, though there’s a chance she could still qualify in a relay.

Coughlin’s result was not unexpected as she winds down her career. Franklin’s downfall is shocking, though not a total surprise.

The 21-year-old has struggled since turning pro last summer and seems a bit overwhelmed by the enormous expectations she faced going into an Olympic year, knowing everyone — fans, sponsors, media, fellow athletes — expected her to burn even brighter after she claimed four golds and a bronze while still just a high schooler in London.

“I am feeling more pressure than I ever have before, but that’s all part of the process … learning how to deal with it and learning how to move forward,” Franklin said. “All I can do is the best I can do.”

In the men’s 200 free, Lochte was second at the final turn but couldn’t hold on, either. Townley Haas surged to the victory in 1:45.66, just a hundredth of a second ahead of Conor Dwyer, who clinched his second individual event in Rio after also taking second in the 400 free.

“I’m just happy that I’m going to Rio,” Lochte said, sounding downright relieved. “You can never go in knowing that you’re going to make the team, just because the U.S. is one of the hardest countries to make the Olympic team.”

For good measure, another stalwart of the 2012 U.S. team failed to qualify. Matt Grevers, the defending Olympic gold medalist in the men’s 100 backstroke, finished third behind Ryan Murphy and David Plummer.

“It wasn’t that tight. They beat me by a half-second,” Grevers said. “I think I’m a little stunned. I think after I let it sink in, I’ll be more distraught than I currently am.”

Yet another Olympic gold medalist, Jessica Hardy, finished sixth in the 100 breaststroke to also miss out on the U.S. team. Lilly King and Katie Meili were 1-2 in the final, extending what has become a definite changing of the guard in Omaha.

Ten of the swimmers who claimed likely spots for Rio on Tuesday night will be first-time Olympians.

Over the first three days of the trials, that number could be as high as 17 — a drastic makeover for the world’s greatest swimming nation.

But a couple of the most recognizable names are doing just fine.

Katie Ledecky is living up to her staggering expectations, and the most decorated Olympian of them all, Michael Phelps, looked as dominant as ever in his first event of the meet.

Ledecky was easily the top qualifier in the semifinals of the 200 free at 1:55.10, more than a second ahead of everyone else, as she looks to add a second event to her Rio schedule. She already won the 400 free, will be an overwhelming favorite in the 800 free and also entered the 100 free.

Franklin was fourth-fastest at 1:57.33, leaving her little chance of knocking off Ledecky but more hopeful that she could at least get the second spot in Wednesday’s final to claim an individual race in Rio. A top-six finish likely would be good enough to put her on the team in the 4×200 relay.

“Right now, I need to make the team in whatever way that looks like,” Franklin said, a tinge of desperation in her voice.

Then there’s Phelps, who already has 18 golds and 22 medals overall — and came out of retirement seeking to win a few more before he calls it quits again.

He was more than a second ahead of the next-fastest swimmer in the semifinals of the 200 butterfly, powering through the water with ease while his 7-week-old son, Boomer, watched from the stands, his mother covering the infant’s ears as the crowd roared for his dad.

“I don’t even know half of them,” he said. “It’s exciting to have new faces, where people are really pumped to come up in the sport. That’s a good thing to see as I’m on my way out.” 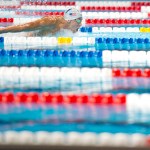 Michael Phelps takes an early lead in the men’s 200-meter butterfly semifinals during the U.S. Olympic Trials Tuesday at CenturyLink Center in Omaha, Nebraska. Phelps finished in first place in the event with a time of 1:55.17, advancing to Wednesday’s finals. – Colleen Harrison/Albert Lea Tribune 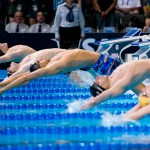 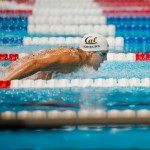 Tom Shields competes in the men’s 200-meter butterfly semifinals during the U.S. Olympic Trials Tuesday at CenturyLink Center in Omaha, Nebraska. Shields finished third in the event with a time of 1:56.35, advancing to Wednesday’s finals. – Colleen Harrison/Albert Lea Tribune 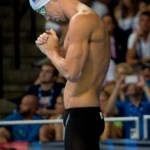 Michael Phelps loosens up before the start of the men’s 200-meter butterfly semifinals during the U.S. Olympic Trials Tuesday at CenturyLink Center in Omaha, Nebraska. – Colleen Harrison/Albert Lea Tribune 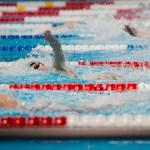 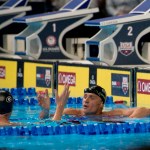 Ryan Lochte congratulates a fellow swimmer after completing the men’s 200-meter freestyle finals Tuesday during the U.S. Olympic Trials at CenturyLink Center in Omaha, Nebraska. Lochte finished fourth in the event with a time of 1:46.62, earning him a spot on the Olympic team heading to Rio. – Colleen Harrison/Albert Lea Tribune 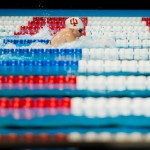 Lilly King competes in the women’s 100-meter breaststroke finals Tuesday during the U.S. Olympic Trials at CenturyLink Center in Omaha, Nebraska. King placed first in the event with a time of 1:05.20, earning her a trip to Rio. – Colleen Harrison/Albert Lea Tribune 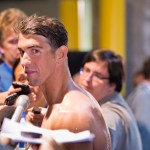 Michael Phelps talks to the media after finishing first in the men’s 200-meter butterfly semifinals Tuesday during the Olympic Trials at CenturyLink Center in Omaha, Nebraska. “I probably would have liked to have been a little faster, but I get to swim in the middle of the pool (Wednesday),” Phelps said. “That’s not something that I had a chance to do that much this year.” – Colleen Harrison/Albert Lea Tribune 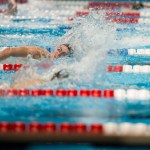