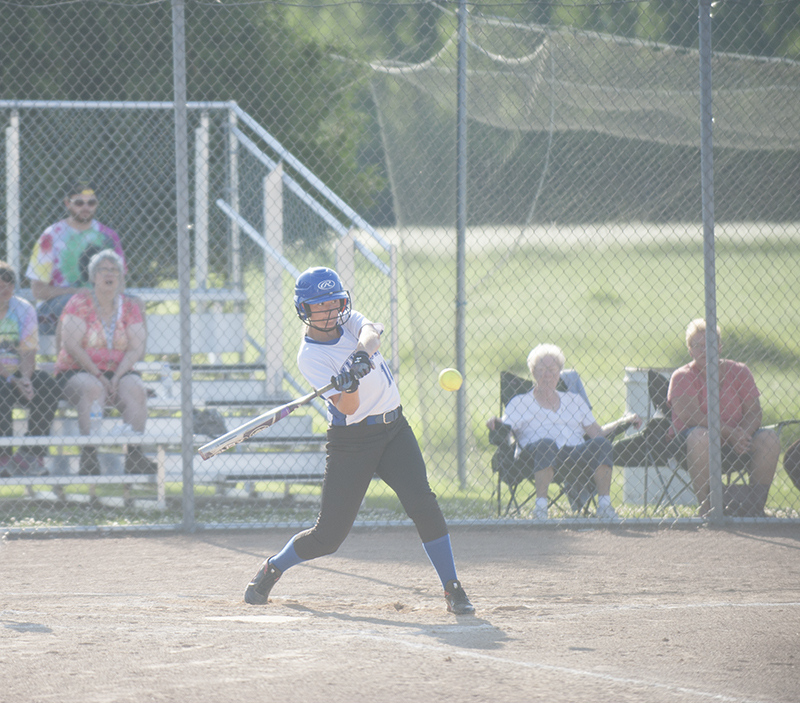 Northwood-Kensett’s Chloe Breitsprecher connects on a pitch for a two-run base hit during Friday’s game against Newman Catholic. Jarrod Peterson/Albert Lea Tribune

Northwood-Kensett got two runs in the first inning, but was held silent the rest of the game by Newman Catholic pitcher Jillian Dunn.

Newman Catholic used a two-run homer by Maria Determan in the sixth inning to propel it to a 5-2 victory.

The Vikings started the game off well, getting two singles and a walk in their first three plate appearances to load the bases. After a flyout, the Vikings got a two-run single from Chloe Breitsprecher.

After that, Dunn settled down and retired the next two batters.

Shelby Low was in the circle for the Vikings, and she put forth another solid outing.

She worked her way out of numerous little jams throughout the game, including getting a ground out with runners on second and third in the second inning and having a Newman Catholic base-runner thrown out at home for the third out in the third inning.

Newman Catholic got one run in the fourth inning, then tied the game in the fifth inning.

The big blow came in the sixth inning. Low hit Rylie Smith to start the inning, then retired the next batter.

In stepped Determan, who hit a would-be home run in the second inning had it not gone foul.

She straightened it out this time and drove a liner over the left-centerfield fence to give her team a 4-2 lead.

Newman Catholic would add a run in the seventh inning.

The loss is the second in a row for the Vikings, who had won four straight previously.

First pitch is scheduled for 6 p.m.