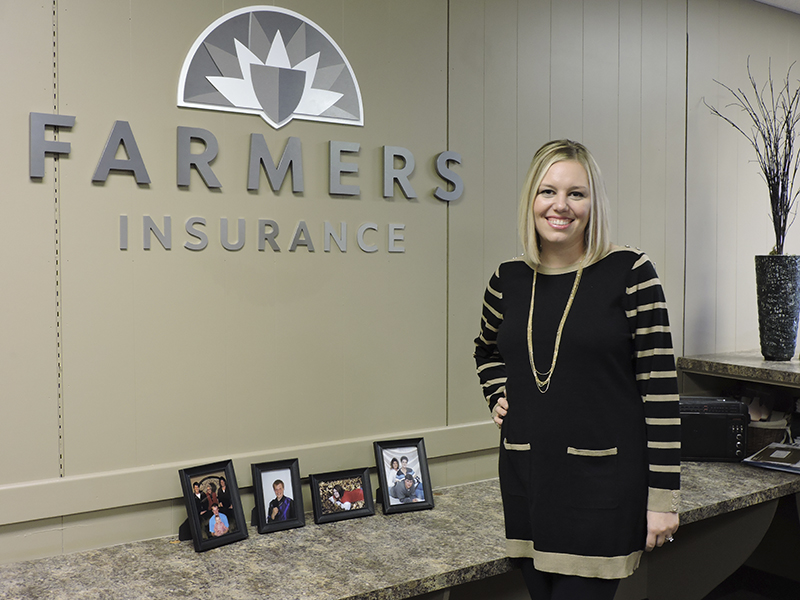 Lyssa Warmka has remodeled her office since taking over the Farmers Insurance office in Wells. - Kelly Wassenberg/Albert Lea Tribune

WELLS – Somewhere far away from the hustle and bustle of city life, where you know your neighbors and they know you.

On a farm in a town like this is where Lyssa Warmka and her husband, Jade, wanted their son, Hudson, to grow up in. After 12 years away, the couple packed up their things in Hastings and moved to an acreage just five miles of north that once belonged to Jade Warmka’s uncle.

Jade Warmka now works for Faribault County. Lyssa Warmka is now a third-generation business owner in Wells. Her grandfather owned Larson Ford for 25 years, her mother owned Tibodeau Painting for 35 years and she became the new owner of Farmers Insurance in Wells in September.

“It’s kind of exciting to be a business owner in Wells,” she said. 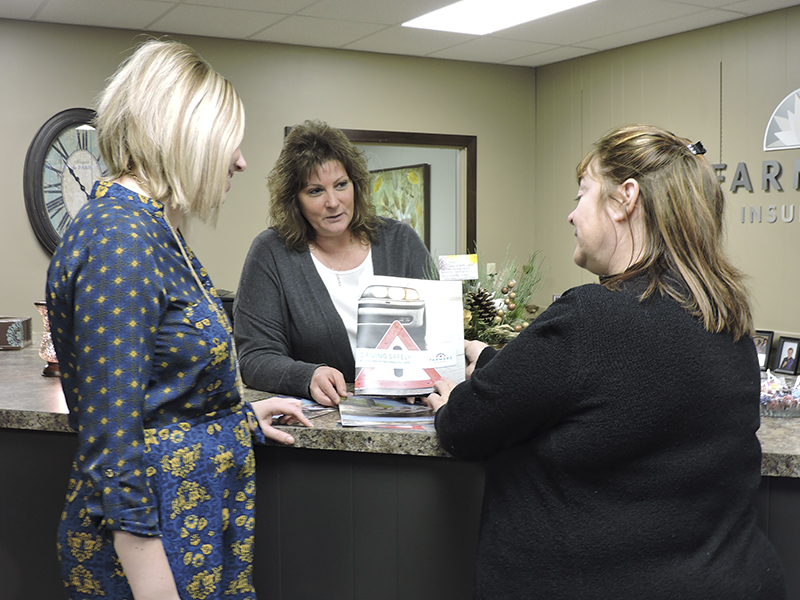 Lyssa Warmka, left, is new to the agency; however, Jackie (Brandenburg) Wetzel, center, has worked at Farmers Insurance in Wells for 18 years. Wetzel assists Warmka with the day-to-day dealings of the agency including networking with NuStar Realty Realtor Kimberly Huper, right. – Kelly Wassenberg/Albert Lea Tribune

Yet, the venture she began last summer wasn’t part of a plotted-out journey. After returning to Wells, Warmka wasn’t sure where her career path would lead. Her background was in sales, having worked at Nordstrom for eight years.

While she thought about what might lie in front of her, she applied at United South Central, where she worked as a paraprofessional until she received a phone call from Farmers Insurance’s former owner Karen Brandenburg.

“Karen actually called me right out of the blue,” she said.

Warmka said Brandenburg told her she was retiring and had something to talk to her about. Brandenburg had three other agents who wanted to take over the agency, but she wanted someone from Wells that people would know and trust.

“She said I was her pick,” Warmka said.

Despite her lack of experience in the insurance industry, she accepted Brandenburg’s offer.

“When Karen called me, I couldn’t pass it up. It was such an amazing opportunity,” she said.

Brandenburg confirmed she was indeed her choice for replacing her. Not only had Brandenburg known her since she was born, she said Warmka was a business savvy person who knew a lot of her customers.

“And I knew everyone would like her,” Brandenburg said.

Prior to Brandenburg’s proposal, she didn’t have any experience in insurance. She completed a week-long training session in California before training for another three weeks in Rochester. By the end of the summer, she was licensed with the state and had trained with Farmers Insurance to become certified.

Warmka didn’t stop there, though.

“Primarily I did a lot of training with Farmers, although I did come in this summer and job shadow Karen to meet the customers,” she said.

Warmka felt this was really important. She wanted to know her customers, to recognize their faces and to build a relationship with them.

“I wanted to earn the customers’ trust and business,” she said, noting she didn’t want to assume that Farmers Insurance customers would stay with her after the business transferred hands.

“There are a lot of options for people — especially for this small of a town — for people to go for insurance,” she said.

Warmka is immersing herself in the job. She has introduced herself to all of the policy holders through a letter she mailed out when she took over the business. She is also calling customers to go over their needs to insure their insurance policies have kept up to date with the changing needs customers often have.

She is also investing her time in her community. Warmka is a member of the Wells Area Jaycees, a member of the church council at Good Shepherd Lutheran Church and is anxiously awaiting the opportunity to volunteer to read with students at United South Central.

12 – Years of being away before returning home