Wilbur was born June 13, 1922, in Freeborn County to Walter and Olga (Lau) Mittag. Walter died prior to Wilbur’s birth. His mother married Robert Broitzman when Wilbur was 2 years old and he became Robert’s stepson. Wilbur attended country school through eighth grade. On Dec. 28, 1943, he married Evelyn Yaste at Bethlehem Lutheran Church in Myrtle. They started their lives together on a farm near Myrtle where their first son was born. Seven years later they bought a farm near Lyle, where they lived for 22 years and where their daughter and a second son were born. Austin had been home for the last 42 years. 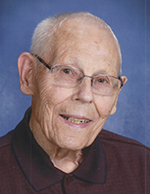 Wilbur was a skilled carpenter and a creative handyman and tinkerer. He especially enjoyed keeping a beautiful lawn and sharing his woodworking talents with friends and family.

Wilbur was a member of Our Savior’s Lutheran Church, where he served as an usher and contributed his woodworking talent in several areas of the church. He enjoyed volunteering at Mayo Medical Center and the American Red Cross blood bank where he was a faithful donor.

Preceding him in death were his parents; stepfather; wife, Evelyn; two brothers, Luverne and Gaylen; and sister, Luetta Wolff.

Funeral services will be at 11 a.m. Thursday at Our Savior’s Lutheran Church in Austin. The Rev. Karen Behling will officiate. Interment will be at Oakwood Cemetery. Visitation will be from 5 to 8 p.m. Wednesday at Clasen-Jordan Mortuary and for one hour prior to the service at the church.