Albert Lea woman to ride 500 miles for Habitat for Humanity 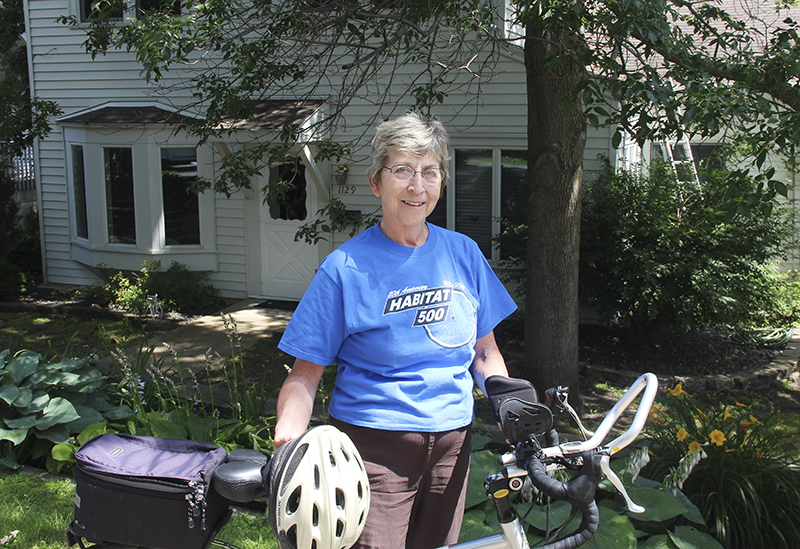 Lilah Aas will start off on a 500-mile bike ride on Sunday to raise money for Habitat for Humanity. - Sam Ehrhardt/Albert Lea Tribune

Starting Sunday, one Albert Lea woman will embark on a familiar yet daunting journey.

Starting in Proctor, Lila Aas will join roughly 130 other riders in a week-long, 500-mile bike ride.

When Aas first started out, she said she had no idea she’d become so committed to the event.

“I thought I would only do it one time,” Aas said of her first ride. “But by the end of the week, people were asking me if I would come again next year and I would say ‘Absolutely!’”

The riders are not biking simply for fun, however. The goal of the bike ride is to raise money and awareness for the nonprofit organization Habitat for Humanity.

“Habitat for Humanity helps people who couldn’t afford it purchase a decent and affordable home,” she said.

The nonprofit doesn’t just give out free money, though. Although no interest is charged, it does require that the loans are paid back. In addition, said Aas, they expect loan recipients to work to maintain the homes they purchase. This method has seen considerably positive results, she said.

“When you grow up in a nice community with a supportive family, it’s hard to imagine having to share a single-room apartment with eight people,” Aas said. “But this is the reality that is faced by many people who are helped by Habitat for Humanity.”

That’s one reason Aas said she thinks the ride is so important.

Riders in the event are required to raise at least $1,000 each year they participate. Although some clock in at the bare minimum, Aas said she is one of five or six riders that aim for $10,000 each year.

To raise the hefty sum, Aas entertains a few different strategies. Donations from family and friends always help, she said. That money only takes her so far, though. She also speaks to service clubs around town to gain donations.

“I’ve probably spoken to every service club in town at least once,” Aas said.

The process to prepare for the ride is no walk in the park.

That time is dedicated to raising the money required for the ride, and preparing physically. Aas said that many riders are in biking clubs, making it easier to get in the miles necessary for preparation. As Aas is in no such clubs, she trains by herself.

She doesn’t feel isolated during the ride, though. Having participated for 20 years, Aas looks forward to all the familiar faces she expects to see during the race.

“I really enjoy the people I’ve met and ridden with over the years,” she said.

Although the lasting friendships Aas had made over the years give her something to look forward to during the ride itself, she feels her main goal is to raise money for the organization in which she believes so thoroughly.

“There are still so many people in need,” she said.