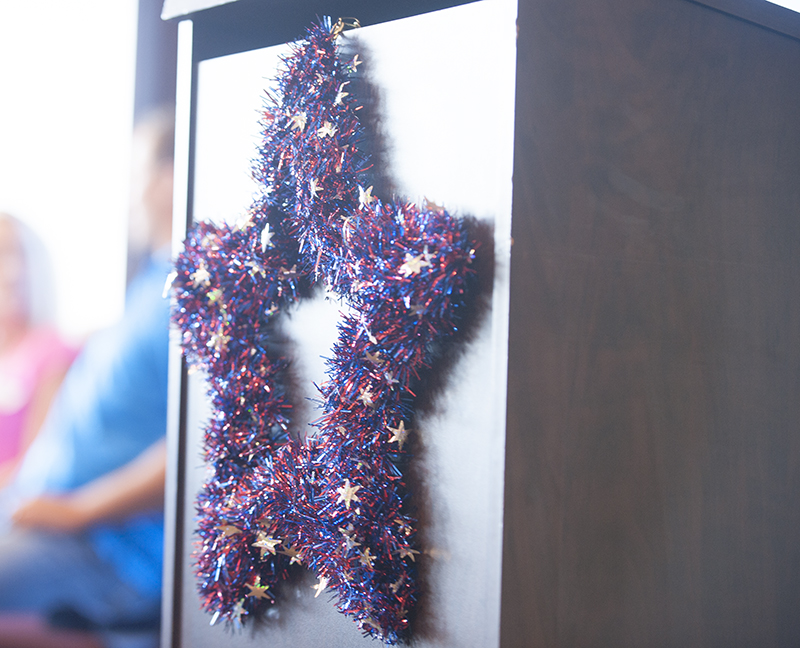 Friday night was a time for laughter, meeting up with old friends, telling gut-busting stories from the past, enjoying some great food and — of course — celebrating the success of former high school Albert Lea High School athletes.

A new batch of seven athletes was inducted into the school’s Hall of Fame Friday at Wedgwood Cove Golf Club, and it was a night to remember.

From hilarious jokes, courtesy of Lowell Brady, to the stories told by female athletes such as volleyball and track standouts Stacy Gilder Torman and Ronalee Vander Waal Johnsen, the night was filled with happiness, excitement and rejoice.

From the youngest in the group, Logan Kortan, a 2009 graduate and Albert Lea’s all-time wins leader in wrestling (182 wins), to the man who helped coach him, Neal Skaar, to some of the football players from the 1970 state championship team, young and old, the community took the opportunity to reunite for one special night.

John Focke, the play-by-play announcer for the WNBA’s Minnesota Lynx, was the emcee for Friday’s event. He got his start in radio in Albert Lea back in 2002 at KATE radio. During his introductory speech, Focke touched on the amount of support athletes are given in Albert Lea.

“I grew up in St. Paul and we never experienced anything on the sporting side like I got to experience in Albert Lea,” said Focke. “We were lucky if our parents showed up to our games. I came down here and suddenly stands were packed for each and every game.”

From there, Focke went on to introduce the Hall of Fame recipients one by one, with each of them coming up to say some words about how grateful they were to receive this honor.

Perhaps the funniest one of the night was Brady.

He shared numerous stories that had the crowd breaking out in laughter. He also talked about how hard it is to be an athlete today, with social media trolls in abundance and there being many more distractions for even high school athletes these days.

Every speech had one thing in common — support. Whether it came from the community, the household where they grew up, friends, extended family or current family, support is what has gotten each athlete to the pinnacle here in Albert Lea.

Neal Skaar talks about his family

Logan Kortan explains how he got involved with wrestling

Ronalee Vander Waal Johnsen talks about sacrifices made by her parents

Lowell Brady gets the crowd laughing with a joke 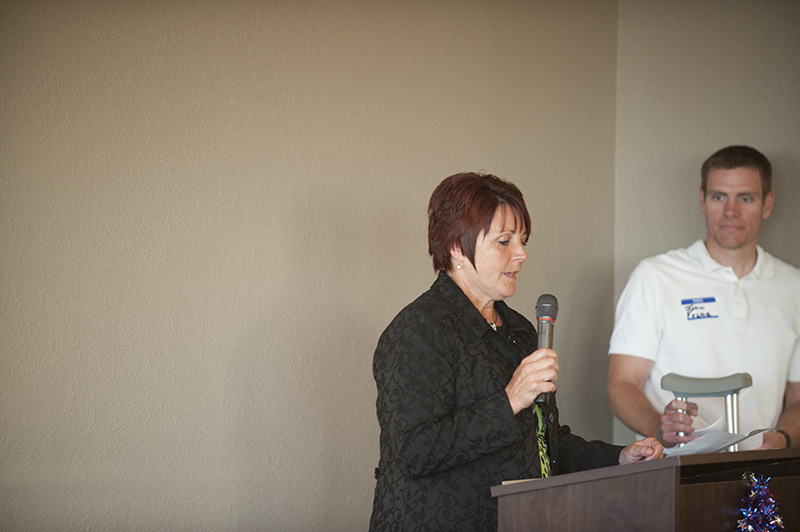 Ronalee Vander Waal Johnsen, the first sophomore to ever start on the Albert Lea volleyball, talks about the sacrifices made by her parents.

She later went on to the University of Minnesota-Duluth, where she was a four-year letter winner in volleyball. Her team won the Northern Sun Conference three of her four years, and she was All-Conference her senior year.

She lives on a family farm in Wessington, South Dakota, with her husband, Chris, and daughters Storm and Sydney. She also has two grown children, Rikki and Ryland. She is employed as a financial consultant with LPL Financial. 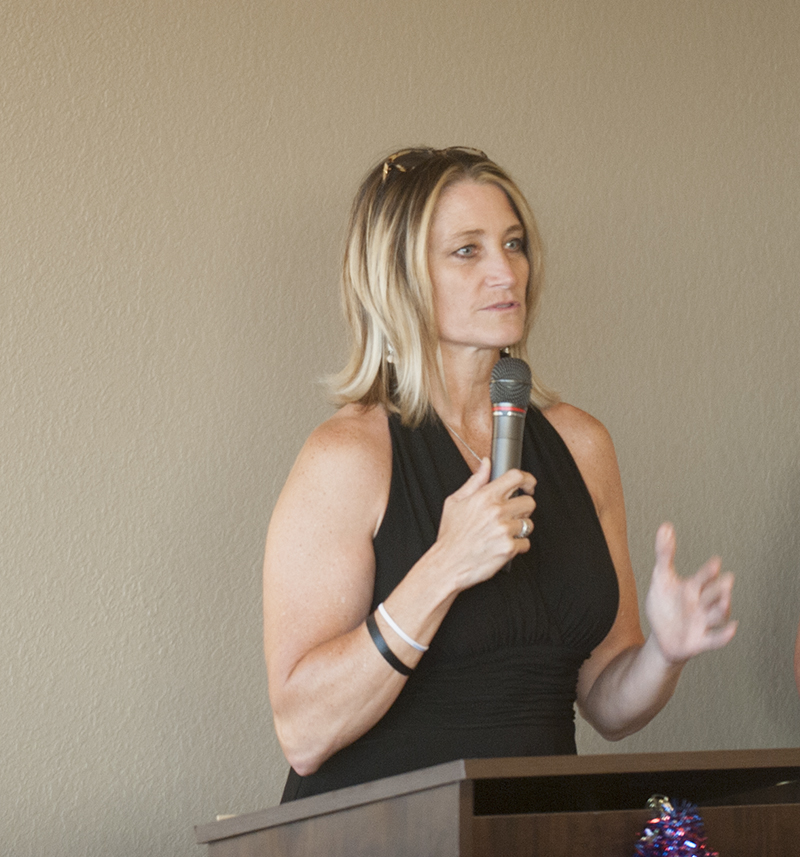 Stacy Gildner Torman, a volleyball standout at Texas A&M, spoke about wanting to play tennis, but missed the tryout. In turn, she became a volleyball superstar.

Gildner Torman graduated from Albert Lea High School in 1982. She was two-time letter winner in volleyball and basketball and a three-time letter winner in track. She still holds the Albert Lea girls’ track and field records in the 100-meter hurdles and long jump and is part of the record-holding team in the 400- and 800-meter relays. In 1980, she was part of the girls’ team that placed fifth in state, which is the highest finish ever for girls’ track and field in Albert Lea.

She continued her volleyball career at Texas A&M where she was a three-year letter winner and was an All-Conference selection. She currently is director of athletic performance for Olympic sports at University of Alabama-Birmingham and resides with her son in Birmingham. 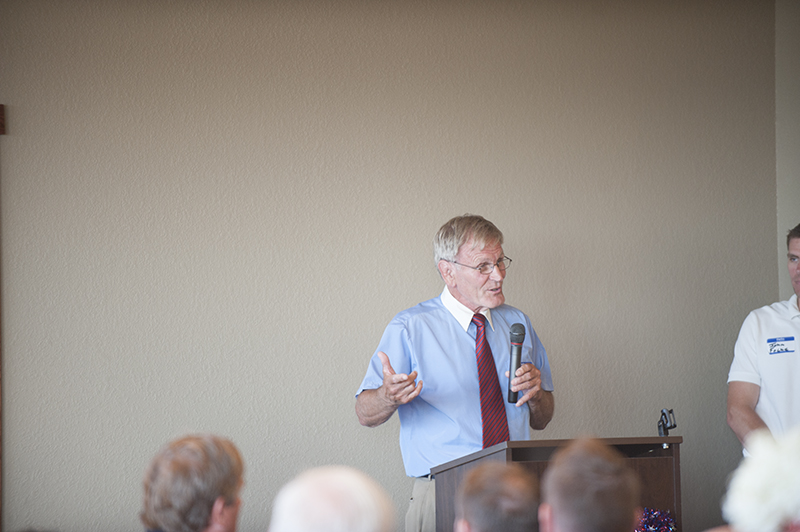 Neal Skaar talks about how supportive his family has been throughout his entire life and how proud he is of them.

Skaar graduated from Albert Lea High School in 1965. After an outstanding high school career for the Tigers, he wrestled at Luther College. While at Luther, he finished fifth, sixth and third in NCAA Division II individual wrestling and is in its Hall of Fame.

In 1981 he lead the Tigers to the state championship, and in 1991 he was named the Big Nine Coach of the Year.

Neal remains as an assistant coach in the wrestling program and resides with his wife, Jean, in Hayward, Minnesota. 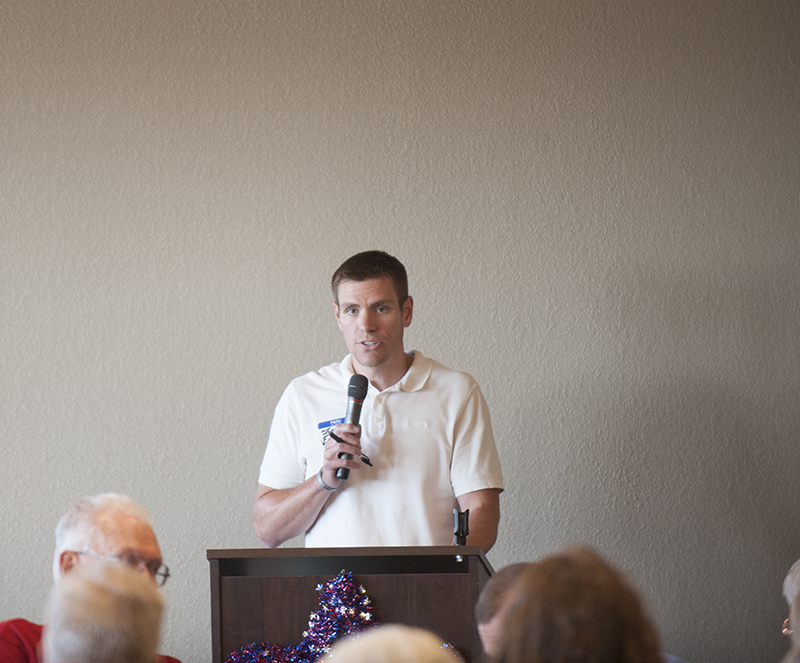 John Focke looks back on his start in Albert Lea and how the community was so supportive of its sports teams.

The 2016 season is John Focke’s second season as the play-by- play announcer for all Minnesota Lynx games. Focke joined the Minnesota Lynx Radio Network as producer and studio host before the start of the 2008 season.

Beginning in 2012, Focke also acted as play-by- play announcer for Minnesota Lynx road games. He is also the executive producer and studio host for all Timberwolves games.

Prior to joining the Wolves/Lynx, Focke was the voice of Northern Michigan University hockey as well as the host of the university’s football and basketball pregame, halftime and postgame shows, in addition to providing color commentary for the games.

A native of St. Paul, Focke graduated from Ohio University in 2002 before starting his career as a sports director at KATE Radio in Albert Lea, where he called play by play for Albert Lea  High School and covered the Wolves, Twins, Vikings, Wild and Gophers.

Focke also spent a year with the Minnesota Wild as a part-time producer with the team’s radio network. 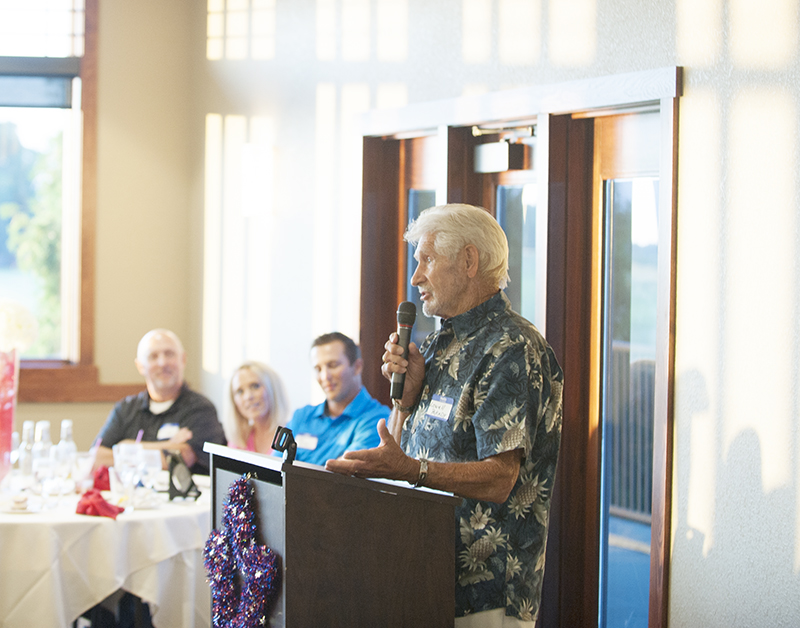 Lowell Brady shares some of his funniest childhood memories, but he also talked about the difference in eras of athletes back when he played compared to athletes today.

Brady graduated from Albert Lea High School in 1956, where he participated in football, basketball and track, lettering seven times. His senior year in football he totaled 987 overall yards, gaining All-Conference recognition. Playing quarterback, he rushed 93 times for 529 yards and threw for 422 yards. He also returned kickoffs for 259 yards and two touchdowns and punted for the Tigers averaging 38.7 yards per punt.

He declined a football scholarship from Denver University and joined the U.S. Navy.

After being honorably discharged, he played quarterback at University of Minnesota State-Mankato, where he received three letters and was named the team’s most valuable player and also was named All-Conference.

Lowell and his wife, Sharon, and family reside in Greeley, Colorado.

As a sophomore he was the Big Nine 120-yard high hurdles champion and competed in the state meet in the event, along with the 180-yard low hurdles.

As a junior in the 120-yard high hurdles, he was Big Nine Conference champion, District II champion, Region I champion and placed third in the state outdoor meet and set a new school record.

In the 180-yard low hurdles, he was the District II champion, Region I champion and placed fourth in the state outdoor meet.

He continued his success as a senior in both events, setting new school records and gaining conference championships, as well as District II and Region I titles. He placed fourth in the 120-yard high hurdles and sixth in the 180-yard low hurdles at the state outdoor meet.

Christian graduated from Albert Lea High School in 1983, where he participated in golf four years and was a member of the varsity hockey team for two years. In 1982, he was a part of the team from Albert Lea that captured the state golf championship. He followed that up with a second place individual finish in the state tournament in 1983.

After playing junior college golf at Texas-McClendon, he received a Division I golf scholarship at Rice University. He received All-Conference recognition at Rice and was chosen for the Individual Scholar Academic/Athlete Award for all sports in 1987. In 1989 he won the Minnesota State Amateur title and was runner up to John Harris in 1990. He later went on to play professional golf on the Nike Tour, where he won the Connecticut Open at Yale University.

John and his wife, Kathy, have three children and reside in Richmond, Texas, where he works as a contract manager for an oil and gas enterprise.