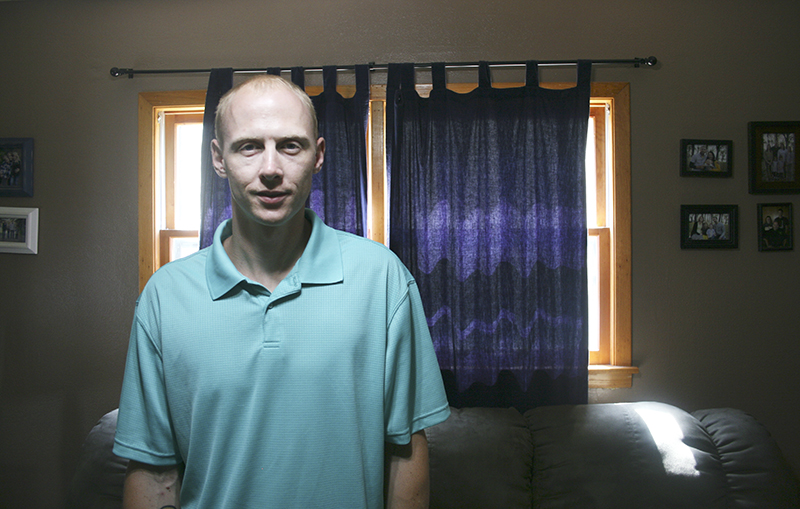 An area man is doing his part to help others in the fight against a disease he has his own experience with battling. - Emily Wangen/Albert Lea Tribune

An area man is doing his part to help others in the fight against a disease he has his own experience with battling.

In August 2014 Brett Boss began to notice hip pain, but just assumed the cause was from his athletic lifestyle. He received treatment for the pain from his chiropractor for months until he went to his family doctor.

From there, he received different tests and biopsies until he was given a positron emission tomography scan, which showed tumors in his left hip as well as around his lungs and heart.

Due to the tumors’ close proximity to the spine, Boss’ treatment did not include surgery, but involved 16 rounds total of chemotherapy as well as radiation therapy. Boss began chemotherapy treatments shortly after Christmas 2014, he said.

Before treatment, Boss noted he was in a lot of pain from the tumors, but by the second round of chemo he said he was pain free.

Boss noted it was a good feeling to know the chemo was working, and said he was able to gain some weight back that he had lost before being diagnosed as he was able to regain his appetite.

During the treatments, Boss said he found it hard to not be able to do things for himself or for others.

“I’d rather be helping others,” he said.

While in hospitals receiving treatment, Boss said he was able to connect with other cancer patients and help them stay positive. It was in those hospitals that he learned cancer was everywhere, Boss said.

Originally from Fargo, North Dakota, Boss lives in Albert Lea with his wife, Danielle, and their two children, Jaelyn and Aidan. He is a firefighter for the city of Albert Lea and has been for the past 12 years. He said he gained his interest in firefighting while in high school where he took firefighting classes.

Boss said he initially struggled with fatigue after his treatments, but said he was able to return to light-duty work at the fire station through his treatment.

Boss said he received help from friends and family throughout his diagnosis and treatment and recovery time, as well as support from the community and firefighters all around the country.

In February 2015, a benefit was held for Boss and his family at the Moose Lodge in Albert Lea. He noted that it was the largest event held at that location. A little overwhelmed, Boss said people from all over attended the banquet, which he said raised over $60,000.

Boss returned to full duty in October 2015 after preparing for the physical tests required to respond to emergencies with the Albert Lea Fire Department.

One month later, Boss was found to have no evidence of the disease. He said he goes in for checkups every three months and hasn’t had any tumors since.

Firefighters developing cancer is not just a problem in Albert Lea, according to Boss.

“Cancer is everywhere,” he said.

Boss noted that firefighters are exposed to more of the chemicals present in a fire 400 times more than bystanders, and said those chemicals can take a toll on the body.

The Albert Lea Fire Department has taken new steps to keep firefighters safe, he said. Some of the new steps include cleaning gear at the scene of a fire, using fire wipes to clean themselves off, and showering and washing clothes soon after a fire. Boss explained that the whole cleaning process can take days following a fire.

The Fire Department has been involved in teaching other departments about its preventative measures and has been helping them put those techniques into practice, according to Boss.

Boss has been recognized by the American Cancer Society’s Relay for Life this year and will be giving a speech at the event next weekend.

While a little nervous, Boss said he is honored by the recognition.

Last year, Boss was a participant in the relay and noted it was a good time for his family.

The Relay for Life will include camping, as well as luminarias in honor of cancer victims and those who are currently fighting or have previously battled cancer.

The relay activities will start at 6 p.m. July 29 at the Freeborn County Fairgrounds.