An Albert Lea man is facing prison time after being charged with three counts of first-degree arson. 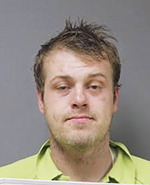 Court documents state the Albert Lea Police Department was dispatched on the morning of June 13 to a residence on 11th Street to a report that a male had started a fire on a deck and was destroying items in the garage.

Upon arriving, an officer found the west side of the deck was on fire.The homeowner was reportedly able to put out the fire with buckets of water; the Albert Lea Fire Department then put out some smoldering material.

An officer was unable to locate the suspect, court documents state. The homeowner reportedly said Nolan had been in the house, was agitated, kicked in two doors and caused some damage before trying to get car keys from someone in the house and ripping parts out of a vehicle — as though he was reportedly trying to hotwire it — before leaving.

An officer observed damage to bedroom doors, a broken hasp and damage to the vehicle.

Court documents state a witness saw Nolan pour oil on the deck. They reportedly did not see Nolan light the oil on fire, but assumed that is what he intended to do.

Court documents state the witness said that when he talked to Nolan later, he did not mention the fire, but made a racial slur.

Nolan reportedly failed to appear Thursday for his first appearance on the charges, leading to a warrant being issued,  according to the Freeborn County Attorney’s Office.