Area woman to be recognized for battling ovarian cancer 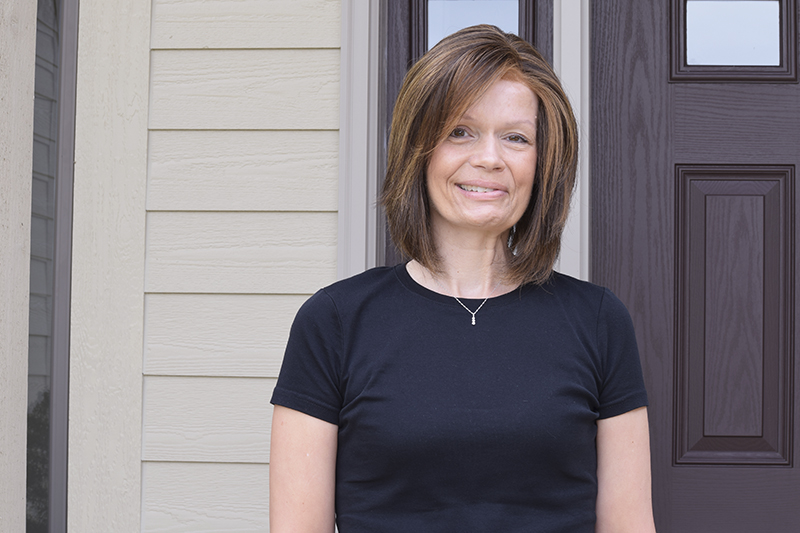 What started out as a suspected urinary tract infection turned out to be something much more serious for one area woman.

In September 2013, Lisa Vogelsang was diagnosed with ovarian cancer at the age of 48. She said September just so happens to be Ovarian Cancer Awareness Month, as well.

In July 2013, months before her diagnosis, Vogelsang went to a local clinic to be tested for the possibility of having a UTI. As the test turned out negative, she said it was suggested she consider a visit to her gynecologist if her symptoms didn’t go away within 10 days. Vogelsang said she took that advice seriously and underwent the typical ultrasound testing most often done to help diagnose the very cancer she would begin treatment for two months later. However, at that time the cancer still had yet to be discovered. She was told her exams appeared normal and that her symptoms were common for that of a premenopausal woman.

Initially, Vogelsang said she was relieved. But as symptoms still did not resolve by mid-August 2013, she was increasingly concerned and wanted answers. Following a few more visits to a local doctor, signs seemed to point to a possible kidney problem, and she said she decided to seek specialized care at the Mayo Clinic in Rochester. It was there that she was eventually diagnosed with cancer. 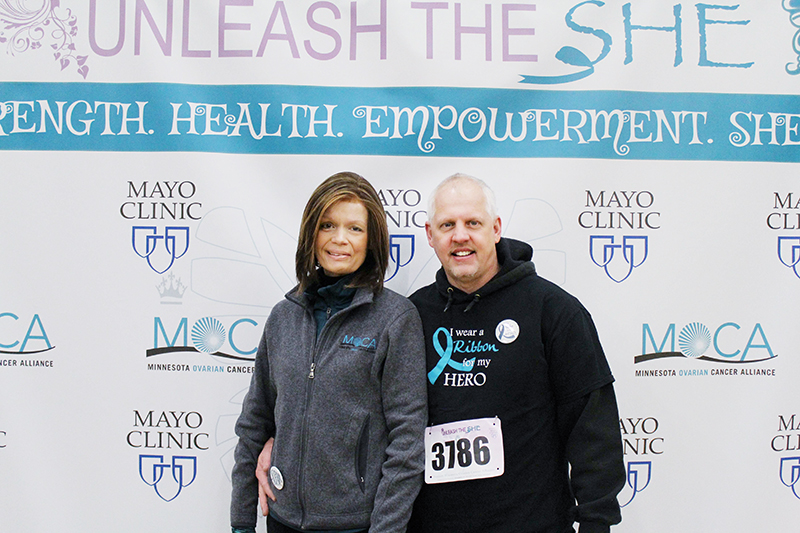 Lisa Vogelsang and her husband, Todd, have lived in Albert Lea for 30 years and are originally from Kiester. – Provided

Though the typical symptoms can often be overlooked as issues much less serious, Vogelsang said she believes collectively, along with knowledge of signs to watch for, certain information can assist women in knowing whether or not to seek medical attention. Looking back following her own diagnosis, she said she was able to connect the vague symptoms she was experiencing:

• Fatigue: For several months, Vogelsang said her life had been full of additional stress, so it was easy for her to dismiss any extra fatigue initially. Her husband had just taken a new job, one of her daughters had just gotten married and another was beginning wedding plans, and her own job was full of extra stress. Fatigue had become common to her and did not seem at all unusual, making symptom go relatively unnoticed.

• Bloating: Clothing seemed a little more snug, but Vogelsang said she definitely felt that to be common for most middle-aged women. Many women with ovarian cancer experience extreme bloating, but she thought her symptom was very mild and almost unnoticeable.

• Back pain: Something not at all uncommon for Vogelsang over the years, back pain was another symptom that didn’t raise a red flag all on its own. As an office secretary, she said her experience with lower back pain has come and gone quite often over the years.

• Menstrual irregularities: Another symptom that didn’t raise a red flag for her, as it’s a very common and expected result of premenopause.

• Abdominal pain: It was this final symptom that drew everything together and actually prompted Vogelsang to continue to seek answers. She said the fleeting, almost lightning-bolt type minor pain she would occasionally experience just before her diagnosis was the symptom she could not dismiss as seeming normal.

According to the Foundation for Women’s Cancer, the following symptoms are much more likely to occur in women with ovarian cancer than women in the general population: bloating, pelvic or abdominal pain, difficulty eating, feeling full quickly or urinary symptoms (urgency or frequency). Those that have any of the aforementioned symptoms almost daily for three weeks or more are urged to take action by seeking medical attention. Women with ovarian cancer report that symptoms are persistent and represent a change from normal for their bodies. The frequency or number of symptoms are a key factor in the diagnosis of ovarian cancer. Prompt medical evaluation may lead to detection at the earliest possible stage, according to the Foundation. 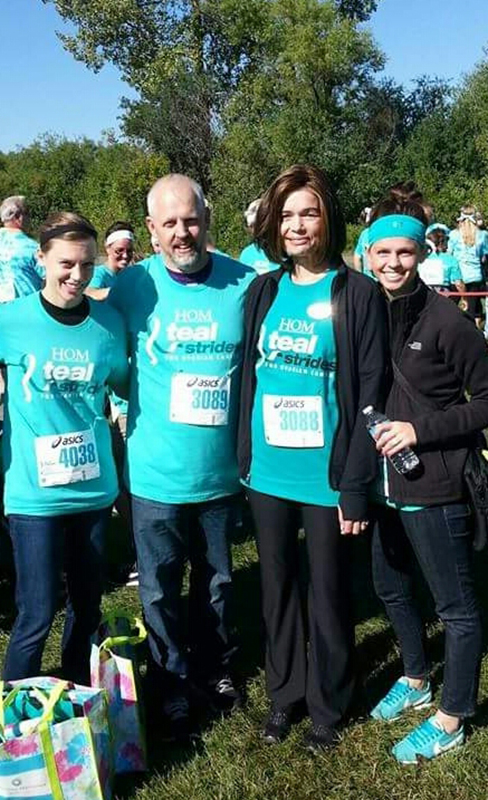 The Vogelsangs have two daughters, Jenna Hegwood of Albert Lea and Holly Stiernagle of Rochester. – Provided

For Vogelsang, the road to recovery has had quite a few stops along the way. Following major surgery, initial chemotherapy — which she said was disrupted by many serious complications — and the completion of front-line chemotherapy, Vogelsang finished her initial treatment in April 2014. She said she considered herself fortunate to reach the status of “no evidence of disease” following both her front-line treatment and for a second time last year following a recurrence, but said she is now once again dealing with the recurrent disease.

Despite her trying medical issues, Vogelsang has stayed positive — something she attributes to her faith and the people in her life.

“My faith in God and support of my incredible family and friends has given me the strength I need each day. Looking forward to the joy in each day also helps a great deal, especially the new joy of spending time with my grandson and celebrating the soon arrival of another grandchild,” she said. “Knowing that others are praying for me and my family is a very uplifting feeling. I am also very fortunate to have such an amazing medical team of doctors, nurses and staff at the Mayo Clinic in Rochester to guide my care.”

While those elements have helped Vogelsang in her own life, she urges others battling cancer to also stay strong.

“Take each day one step at a time,” she said. “Never give up hope, and remember that you do not face your disease alone. Reach out to loved ones and friends and consider networking with others in your situation.”

Vogelsang also suggested that those currently in the fight consider medical trials at every point of their treatment, along with the consultation of their medical team.

“Like many people, I always thought that trials were something used as a last resort, but I have learned that trials are often even used at the start of treatment for some people and are so important to give more options to patients, offering cutting edge treatment currently being advanced through research,” she said.

She also had advice for those who have loved ones currently in the struggle.

“When cancer strikes someone you care about, you may ask, ‘What can I do to help?’” she said. “My first response is to tell everyone able to please give blood. It is the gift of life. I have personally benefited several times throughout treatment by the gift others have given. By setting aside a little time to donate blood, you can help save a life. Also consider bone marrow registries and organ donation.”

Vogelsang, originally from Kiester, has lived in Albert Lea for 30 years with her husband, Todd. The couple has two adult daughters, Jenna Hegwood of Albert Lea and Holly Stiernagle of Rochester. Vogelsang has served as Grace Lutheran Church’s office manager for the past 32 years, and will be honored there with a retirement celebration following the 9 a.m. worship service on Aug. 7.

Before she is honored for her years of service at the church, though, Vogelsang will be honored this weekend as one of two local cancer survivors recognized at the American Cancer Society’s Relay for Life. One of the other honorees is Albert Lean Brett Boss, who has battled stage 4 Ewing’s sarcoma. As part of their recognition, both Vogelsang and Boss will get a chance to speak during the Relay for Life event.

“I am very honored to speak, representing the many survivors of Freeborn County and strive to be a symbol of hope to others,” Vogelsang said.

“Relay For Life is such a personal and uplifting experience, reminding all survivors and their families that they are not alone in their fight,” Vogelsang said. “Funds raised through Relay For Life are so important to help advance the research for a cure to benefit all who are afflicted with the many forms of this dreaded disease.”

• Urinary issues with urgency
or frequency