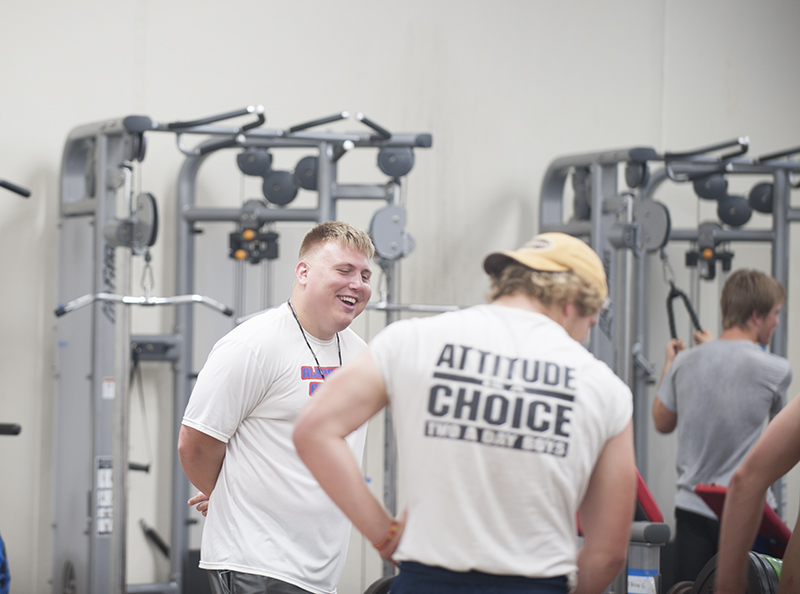 New Albert Lea High School head football coach Corey Black, left, shares a laugh with some of his players during a morning workout this summer. Black was named the head coach in May. Jarrod Peterson/Albert Lea Tribune

Corey Black came to Albert Lea by way of Bemidji State University, where he attended college, and Rochester Mayo, where he went to high school.

This fall will mark his third year at Albert Lea High School, where he took a job teaching ninth-grade physical science.

During the past two years, Black was an assistant coach for the varsity football team, a program that has been winless during his two years.

But something will change for Black this coming fall.

In mid-May, his life changed when he was named the head coach of the Tigers.

“It was a relief to be named the head coach,” Black said. “I wasn’t really sure if I was going to get the job, but once I did, I was full-go. Immediately, I started thinking ways to put my thoughts and ideas into practice.”

Despite being young, Black, 25, has nearly eight years of coaching experience. He has been around the game his whole life. He played center when he was in high school, then helped coach Bemidji High School while in college.

“I have seen a lot of football in my short life,” Black said. “I have been introduced to different styles of offense, and putting our athletes in spots to succeed will be a top priority for me. That’s what I think I can bring to that side of the ball.”

He acknowledged the toughest part of his job will be turning around the culture of the Tigers’ program from losing to winning.

“It’s not going to happen right away,” said Black. “We aren’t going to win a section championship our first day of practice. It’s going to be a long process, but I hope it’s an enjoyable process for these guys.”

For the last month, Black has been hard at work with returning and prospective football players, building the foundation for the future. He said he is trying to make workouts more enjoyable for players, and making sure there is a structured schedule they can follow.

“It’s really important to me that the senior class is involved,” said Black. “It really starts with (seniors). They are the oldest and most experienced, and I am relying on them a little bit to help lead the way.”

So far, between 25-35 players have been showing up for early morning workouts that include weightlifting, ab workouts and running.

“It’s been good so far,” Black said. “I feel the guys are not only working hard, but competing with each other. Helping each other and learning from one another. That’s teamwork, and I hope that translates onto the football field.”

While it seems like summer just started, Black’s first season at the helm is approaching quickly. The football season kicks off in a month, and Albert Lea’s first game is on Sept. 1 at Waseca.

When he steps on the field as head coach for the first time, it’ll be a huge step in his career.

“There is a lot of pride in this for me,” Black said. “Not only that, but I want my guys to be ready for that first kickoff. Everything we are doing now is preparing us for that.”