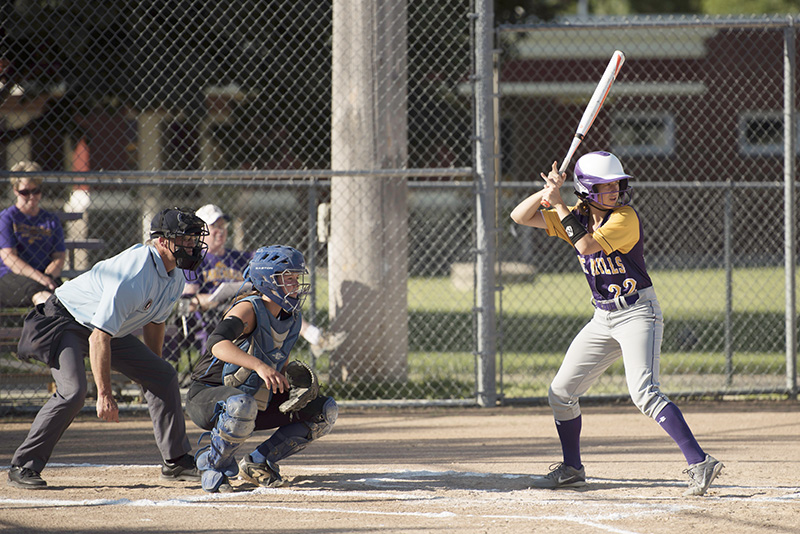 Lake Mills’ Ashley Groe focuses in on the pitcher during an at-bat against North Iowa Wednesday. Lory Groe/Albert Lea Tribune

he Bulldogs were looking to end the regular season on a high note.

Having lost two games and one rained out earlier in the week, Lake Mills was looking to head into the playoffs with a victory.

But Forest City had other thoughts Friday night.

The Indians used two big innings to take down the Bulldogs, 12-6.

The Indians scored four runs in the first inning off Bulldogs pitcher Jade Gasteiger to take an early advantage.

The Bulldogs broke into the scoring column with a run in the third inning. Then, over the next two innings, they managed to take a 6-4 lead in the fifth inning.

That’s when the Indians would awaken. They scored seven runs in the bottom of the fifth to take an 11-6 lead, then added an insurance run in the sixth.

Gasteiger lasted five innings, but gave up 12 runs, seven of which were earned.

The Bulldogs knocked out seven hits with Gasteiger leading the way. She had two hits and two RBI.

The Bulldogs ended the regular season with a record of 10-17.

They will begin the playoffs Tuesday when they travel to St. Ansgar.