Calls for stop sign at intersection of fatal crash

An Albert Lea city councilor wants city officials to consider implementing additional stop signs in the area where an 8-year-old Albert Lea girl was struck and killed earlier this month. 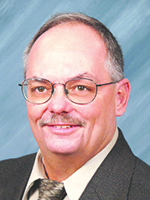 Sophie Stultz was struck and killed July 2 at the intersection after she collided with a vehicle while riding her bicycle.

Brooks said there has been a safety problem at the intersection for a while. He said eastbound traffic is coming down a big hill and seeing pedestrians or vehicles traveling up and down the hill is hard for northbound and southbound traffic

“It’s been a problem for some time and it just took an unfortunate thing to really get this thing moving,” he said.

Frank Hall Drive resident Nick Ronnenberg said he wants slower traffic on the road and more sidewalk space in the area, noting he has seen families — including women and children — having to walk to Frank Hall Park on the street.

He said he believed Sophie Stultz would still be alive if a stop sign was in place at the intersection, noting he has expressed concern about the area before to officials.

Albert Lea Engineer Steven Jahnke said they will look at speeds, visibility and the number of accidents at the intersection, then determine whether there should be a stop sign based on a point system.

Albert Lea City Manager Chad Adams said the issue could be discussed at the council’s next meeting July 25.

In other news, the council:

• Tyler Wilson was given the oath by Mayor Vern Rasmussen Jr. as a new Albert Lea Police Department officer.

• Identified election and health care election judges for the Aug. 9 primary election.The judges must meet eligibility requirements as stated qualifications as submitted by the city clerk.

• Approved the sale of 1761 Pride Lane to Glacier Properties, LLC. The property was subject to forfeiture to the state due to the owner’s non-payment of property tax and assessments. The city has placed the property on hold and has found a potential buyer. The city will pay Freeborn County for the property, get a deed and the county will pay the city for the unpaid assessment. The purchaser will then purchase the property from the city. A few minor modifications could be made to the purchase agreement prior to closing.

• Authorized a lot split for Duane Johnson to the west of existing city garage pertaining to the city’s acquisition of the parcel north of city garage.