On Oct. 6, 1946, she was united in marriage to Floyd Joseph Matter Sr. in Albert Lea. They resided in Hollandale and farmed until 1958, when they moved to Lyle. From 1962 to 1982, Carmen worked as a waitress for various Austin area restaurants, including Railway Cafe, Rose Room, Watts Truck Stop and Country Kitchen. From 1982 to 2002 the couple owned and operated Matter Crossflags Center, traveling to stock car races throughout the Midwest in their motor-home. For 21 years, Carmen and Floyd enjoyed spending their winters in Rockport, Texas. Carmen was a longtime member of Our Savior’s Lutheran Church in Lyle, where she was active in her circle and Women of the Evangelical Lutheran Church Association. She enjoyed cooking and baking, gardening, organizing photograph books, making quilts for grandchildren and great-grandchildren, and — most of all — time spent with her family. 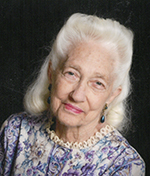 She was preceded in death by her parents Ben and Edna Kolls; husband, Floyd, on July 7, 2005; and brothers-in-law Bud Matter, Richard Veldman and Harold (Pat) Veldman.

Funeral services will be at 1 p.m. Saturday at Our Savior’s Lutheran Church in Lyle. The Rev. Richard Hegal will officiate. Visitation will be from 11 a.m. to 1 p.m. Saturday at the church prior to the service. Interment will be in Grandview Cemetery in Austin.

Memorials in Carmen’s memory may be directed to Lyle Cancer or Our Savior’s Lutheran Church in Lyle. Services prearranged and performed by Worlein Funeral Home of Austin. Condolences may be expressed to the family online at www.worlein.com.