Carol was born March 11, 1930, in Albert Lea, the son of Alfred and Katherine (Billat) Severtson. He attended District No. 23 Country School from first grade in 1936 until eighth grade in 1944. Carol had six brothers, five of which were in World War ll at the same time. The youngest, Kenny, was in Korea. He was very proud of his brothers. 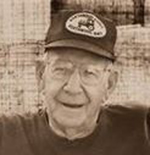 In his free time, Carol enjoyed fishing, having fish frys and camping, which began in 1964 with a trip almost every year to Rainy River in Birchdale. His last trip was in September 2015. He loved gardening, taking pictures and attending many ballgames of his grandchildren and great-grandchildren. Carol also had a hobby of CB radio back in the day with his handle name being “Sivit,” which a lot of family and friends continued to callw him. He enjoyed his computer, his one-of-a-kind posts and stories on Facebook and watching the eagles on the Department of Natural Resources live camera. Carol also was very proud of his Polish intuition and politics and spent a lot of time talking with his bulldog, Cowboy. He also loved his time spent with family and grandchildren telling stories.