Catching up with successful athlete brothers from the 1960s and 1970s 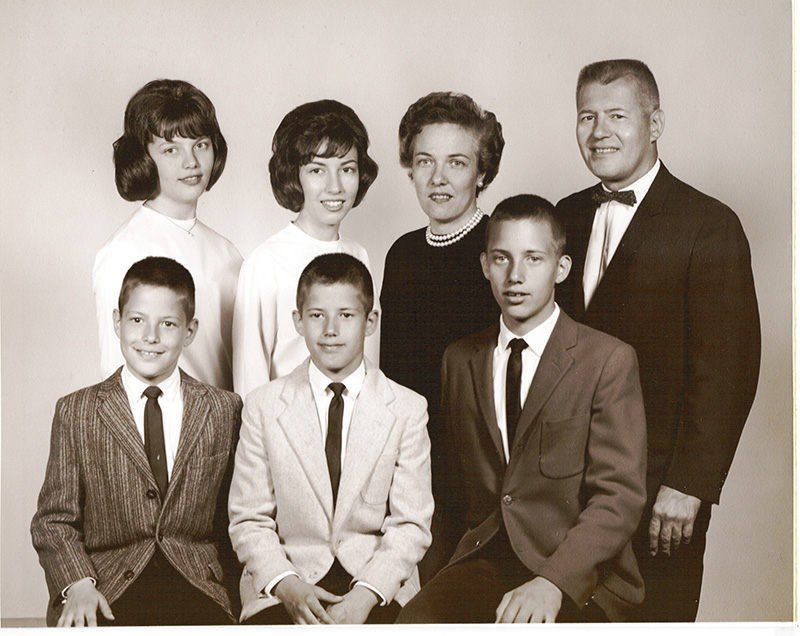 The Pappas family with the three boys — Jim, Mike and Chuck — in the front row pose for a picture when the boys were younger. Provided

In early 1965, John and Angie Pappas received a call from their close friend, George Dress, asking them if they would consider moving to Albert Lea and taking over Chef Café.

George had been running it as an “absentee owner” ever since his brother-in- law, who had been operating it, died of a sudden heart attack. Ironically, John Pappas had been in Albert Lea that previous summer looking at the possibility of buying Gold’s Grill.

John and Angie Pappas had both grown up in the restaurant business, John Pappas was from LaCrosse, Wisconsin and his family had the Elite, a candy and sandwich shop. Angie Pappas grew up in Albert Lea, where her family had a fruit stand and later opened Phil’s Café. Angie Pappas and George Dress grew up together and the Greek families were very close.

John and Angie Pappas got engaged at the band shell by Fountain Lake, were married in Albert Lea and went to live in LaCrosse. There they started their family of four children, moved to California to open a restaurant and ended up moving to Minneapolis in 1957 — now with five kids in tow.

In June of 1965, the Pappas family — John, Angie, Georgeia, Chuck, Stephanie (whom everyone came to know as Taffy), Mike and Jim — moved to Albert Lea and took over Chef Café. All seven lived in the two-bedroom apartment above the restaurant.

Life consisted of working various shifts in the restaurant, mopping up after closing, school, homework, friends and sports (the more sports you went out for, the fewer shifts you had to work at the Chef).

Family dinner together was only on Sunday afternoons after closing. John and Angie Pappas became active in the community and John Pappas served as president of the Albert Lea School Board and the Quarterback Club.

Initially, Georgeia was the most hesitant to move to Albert Lea as she would have been starting her senior year in St. Louis Park, but once in Albert Lea, she made many friends, joined the chorus and went on to Lea College where she was a wrestling cheerleader and homecoming queen candidate. Taffy became a member of the Pompom squad — thank goodness — as the family all became sick of hearing the song “The Happening” by the Supremes which was the tryout song for the squad, as they practiced, practiced and practiced their tryout routine.

The Pappas children’s summers were spent working in the Chef —they did get breaks that allowed them time on Fountain Lake with friends who had boats, and Friday and Saturday nights were spent at the community center or the armory meeting friends and dancing to the Fury’s from Owatonna or the RaveOns from Minneapolis.

Meeting the friendly children in Albert Lea who would stop in the restaurant and introduce themselves that first summer, was very instrumental in guiding the boys into their respective sports and building lifelong friendships.

Mike attended seventh grade at Central Junior High located at the Senior High School, then attended Brookside in eighth and ninth grade, then onto the high school.

Chuck started 10th grade at the high school, and all the brothers took part in after school sports. Running the lake soon became the automatic drill for the Pappas boys year round — whether required by a coach or not.

Fist fights between the brothers became commonplace in the back of the Chef, must have been a result of that competitive nature. Great effort and clean up always followed the altercations to make sure John Pappas never found out about them.

All three boys played football and ran track, winter sports of choice were wrestling for Mike and Jim Pappas and hockey for Chuck Pappas — all three had the nickname of “Greek.” The boys used to share winter stories comparing the steamy, stinky wrestling room to being up all night flooding the rink in the “pig.”

John and Angie Pappas were great supporters of sports in Albert Lea. Chef Café was host to Coach’s Corner, where each Saturday morning, Tom Capistrant from KATE radio interviewed the coaches for a recap of their teams’ performance from the previous week.

John Pappas always made a chocolate cake with marshmallow frosting after each win of the football team as they successfully vied for the state championship for so many years.

John and Angie Pappas attended many of the high school sporting events and everyone always knew when Angie was in the audience because of that darn copper cowbell she used to ring all the time.

Because the family lived above Chef Cafe, there was no traditional neighborhood — only storefronts and other apartments above them.

The family’s “walk through the neighborhood” usually consisted of a foot race between John Pappas and the boys to the Rivoli or Broadway Theater, leaving Angie Pappas and girls behind (John Pappas never lost a race), dragging Broadway, Hegge’s Dairy Queen, Jakes (next to the Aragon Bar then), Field’s Pizza Cellar, Piggly Wiggly, The Maidrite, The A&W, Merrill’s Popcorn Stand, Berglund’s Sporting Goods and Busy Bee Shoe Store for skate sharpening.

Albert Lea was a great place to raise a family.

• Wrestled at 154 pounds on the 1971 state championship wrestling team

• Co-captain in football and wrestling

What happened to the Pappas boys after graduation?

Chuck Pappas enlisted in the Marine Corps during his senior year of high school and left for boot camp shortly after graduation.

After his enlistment, he attended Iowa State University on a hockey scholarship, eventually transferring to Mankato State University and completing his degree in recreation and park administration.

He married Theresa Mahoney, and the two have six children and 10 grandchildren.

Mike was inducted into the Albert Lea High School Athletic Hall of Fame in 2012.

He married Karen Pernokas, and the two have five children (four girls and one boy) and two grandchildren.

Jim Pappas went on to Augsburg College where he lettered four years in both wrestling and football.

In wrestling he was a co-captain, conference champ, two-time national qualifier and assistant coach.

He was a two-year starter in football. He completed his degree in biology and physical education.

He married Mary Sprenger, and the two have three daughters and three grandsons.