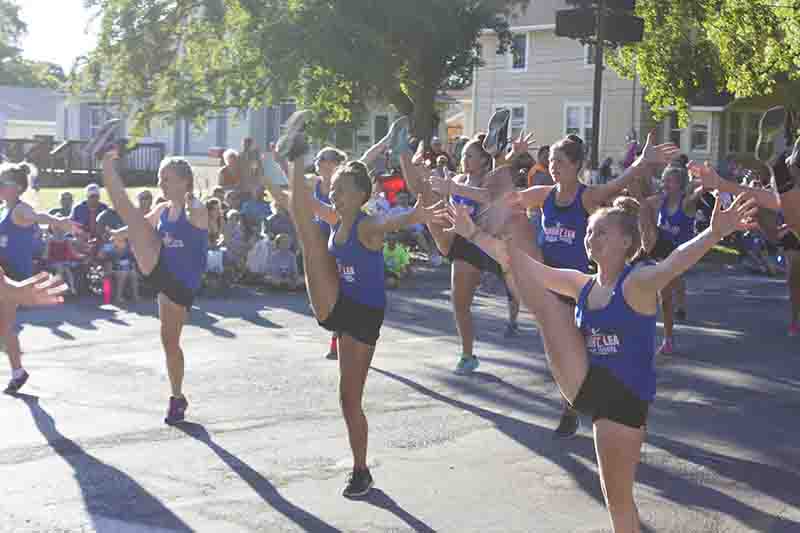 A dance team performs during the Third of July Parade on Sunday in Albert Lea. - Sam Ehrhardt/Albert Lea Tribune

Seats were a rare commodity along Bridge Avenue Sunday, but candy was not. That was where Albert Lea held its annual Third of July Parade.

The crowding around the street and jostling for viewing positions had begun long before the first float went by around 6 p.m.

Everyone along the street had different reasons to be there. Some had family or friends in the parade, some were simply showing their patriotism and others, notably children, were there for the candy.

One emotion shared by the vast crowds of people present at the parade was optimism. Everyone was happy to be there and supportive of the causes for which floats were being shown.

Shea was one of many who thought last year’s parade contained more than enough negative or controversial floats.

Shea and the other parade-watchers were right to be optimistic. This year’s parade seemed to feature floats that most viewers were excited about.

“My favorites were the marching bands,” said Albert Lea native Anthony Huerta-Apanco. “Huge credit to both the ALHS marching band and the NRHEG marching band.”

Other crowd favorites included the Albert Lea dance team, the numerous bands that played and the Christianson Plumbing & Heating float.

There seemed to be more to the parade than just the floats, though. Joyful children running around collecting candy, grandparents looking on fondly and the smell of grills everywhere were a few things that added to the festive spirit.

“My favorite part of the Fourth of July weekend is enjoying fireworks with family and friends,” Huerta-Apanco said. “Whether it’s fireworks, hot dogs or just being outside, it’s family and friends that make this weekend so special.”

Another reason why this weekend is so important is the remembrance of veterans. The very first float in the parade was a color guard consisting of veterans of the United States armed forces. Shortly after, there was a float dedicated to the soldiers who have passed while fighting for the country.