Jeffrey and Darla Chavez of Duncanville, Texas, would like to announce the passing away of their dearly loved and precious son, Christopher Lee Chavez, July 17, 2016, at Charlton Methodist Hospital in Dallas, resulting from kidney and diabetic medical issues. 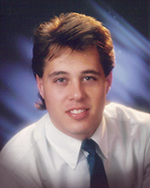 Christopher, 46, was born Dec. 30, 1969, in Albert Lea. At age 7, Christopher and his brother, Troy, moved with his parents to Dallas in August 1977, where his father, Jeff, attended Christ for the Nations Bible Institute and his mother worked as a court reporter. Christopher graduated from Duncanville High School and attended Christ for the Nations Bible Institute as well. From a young age, Christopher had an interest in sleight of hand and magic, which he later developed into a professional career, performing in Branson, Missouri, for a number of years. Christopher was a marvelous entertainer and performer, as well as music lover, athlete and baseball player. Before becoming too ill, his family had the joy and privilege of taking Chris and their family all over Europe, including England, France, skiing the Matterhorn in Zermatt, Switzerland, visiting the French Riviera, Venice and the Colosseum in Rome, Italy.

Christopher’s kindness, sense of humor and charm led to him being loved and liked by all those he came in contact with.

Christopher is survived by his parents Jeff and Darla Chavez of Duncanville; his brother, Troy Chavez, and Natalie and family of Arlington; his grandfather, Tony, and Ann Chavez of Glenville; and nephews, nieces, aunts, uncles and cousins — primarily throughout Minnesota and Texas. A private memorial with family and friends will be announced and take place at a later date with a link to a video memorial of Christopher’s life.