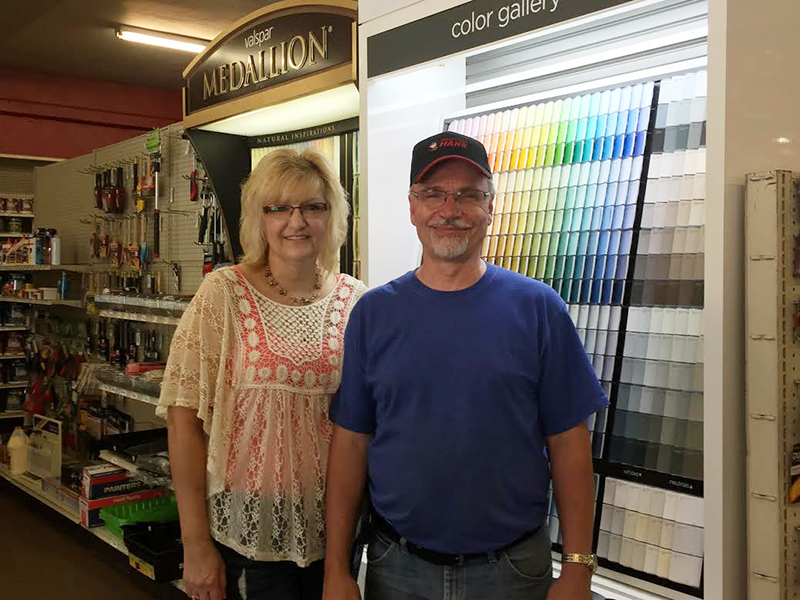 Sue and Jon Mickelson are the new owners of Hardware Hank in Clarks Grove. The couple purchased the establishment in February. - Kelly Wassenberg/Albert Lea Tribune

CLARKS GROVE — Clarks Grove’s hardware store is under new ownership after a lifelong resident and her husband stepped forward to purchase the Hardware Hank store in February.

The fate of the store, which was formerly owned by the late Bill May, was up in the air after his passing last March and Sue Mickelson felt she had to step up to the plate.

“I couldn’t see it closing,” Mickelson said. “I grew up in this town.”

Mickelson said she has fond memories of May and one of his employees opening up the store on winter mornings so neighborhood children didn’t have to wait outside in the cold for the bus.

“I’ve always love the hardware store,” she said. “I used to work for Bill, too, and I just couldn’t see it go under.”

Mickelson and her husband, Jon, jumped feet first into the business and are still learning the ropes, but she said they’ve had plenty of help along the way.

The couple’s children and grandchildren have all found ways to help. All of their children have contributed in their own ways, including a daughter and son-in-law who are employees of the establishment. The younger grandchildren help customers find whatever they need.

The new owners have made a few changes to the store since taking over. The inside of the store has been painted and they’ve moved things around a bit. Other changes may come down the line, according to Mickelson.

Mickelson said her husband is looking into the possibility of creating a rental service, which would allow the store to rent out tools and equipment to customers. She said they will also be expanding their merchandising to include items that cater to the female demographic.

The store also has a few things most will not find in a hardware store. Mickelson notes they have many items that have been passed on from owner to owner. She guesses some of the items in the store may go back to the 1950s. Some of the items she has tucked away for later use, while others have been donated to the Clarks Grove museum, but some items are just waiting to be found in the store.

Merrill’s Popcorn caramel corn and popcorn balls can also be purchased in the store, as Mickelson also owns the popcorn stand — which was started by her grandfather and continued on through her grandmother and mother.