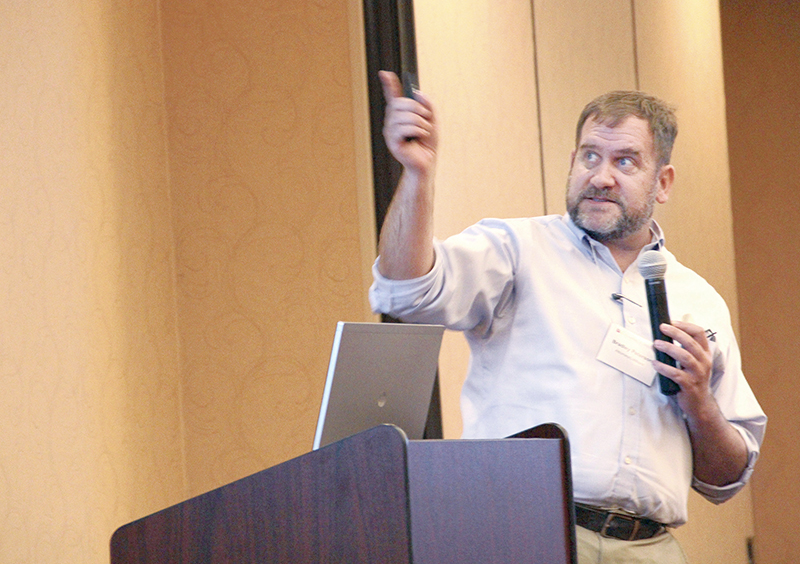 AUSTIN — About 70 greater Minnesota leaders were on the case Wednesday at the Holiday Inn Austin Conference Center to answer a key question cities across the state have been asking: Who killed the state bonding bill?

“We are going to investigate the demise of the bonding bill,” CGMC senior lobbyist and attorney Bradley Peterson said. “Is the bill dead or is this merely a missing persons case?”

Through a presentation titled “Law & Order: SOB” — for state office building — Peterson led city leaders through an investigation of the bonding bill’s demise during the first day of the Coalition of Great Minnesota Cities Summer Conference, which is being hosted in Austin through Friday for the first time since 2000.

One thing was clear from the beginning, most in the room viewed the 2016 Minnesota Legislative session as a failure. A poll of the room saw 90 percent call it a failure — and Peterson said he accidentally voted to call it a success.

The Coalition of Greater Minnesota Cities Summer Conference gets underway with more than 70 people in attendance at the Holiday Inn Austin Conference Center on Wednesday. – Jason Schoonover/Albert Lea Tribune

In fact, the first conference of session traditionally centers on what happened at the legislative session, but CGMC took a different approach this year.

“We’re not going to go through a point-by-point what happened at the Legislature,” Peterson said. “Because we all know: nothing happened.”

From the start, Peterson stressed it’s a complicated process to pass a bonding bill since it needs a super majority with support from both parties to pass.

Peterson led people through a quick summary of key events with the bonding bill:

— On Jan. 15, Dayton introduces his version of the bill with a total of $1.4 billion, which included $167 million for water infrastructure upgrades. Water infrastructure needs have been key for cities as they work to meet new Minnesota Pollution Control standards, which could cost Austin more than $20 million.

— On March 8, the session starts on schedule.

— On April 7, House Republicans release a $600 bonding bill target — but not a bill — which Peterson argued was probably too small to garner enough support to pass in the House and Senate.

— On May 2, Senate Democrats unveil a $1.8 billion bonding bill with $167 million in water infrastructure changes — perhaps too large in comparison to the House bill. On May 5, the Senate votes on its bill, which gets 40 votes and fails by a single vote.

By this point, the House has yet to release a bonding bill, only its forecast, which became a point of contention, and Democrats begin pushing for the full bill.

Though both bills failed in the House and Senate, the conference committee meets on the two bonding bills.

Greater Minnesota Partnership Executive Director Dan Dorman worked on two bonding bills during his 1999-2006 tenure as a Republican District 27A representative. He agreed it was very unusual to have conference meetings on failed bonding bills.

— On May 22, the last day of the session to pass bills, the House introduces a $990 million bonding bill with $133.5 million for water infrastructure. But the bill is introduced with only 40 minutes left in session.

Peterson described the chaotic scene of House Democrats cramming into rooms to see projects lists on a spreadsheet without even seeing the full bill language and the finer details.

The bill passes 91-39 at 11:45 p.m with 15 minutes to go. The bill is rushed over the Senate, where it passes 53-12 at 11:53 p.m.; however, an amendment is added involving the southwest light rail, which requires the House to pass the amended bill. But the House adjourns at 11:56 p.m. without voting on the amended bill.

The blame games largely centers around the light rail addition, which Republicans argued Democrats slipped it in without their knowledge and Democrats arguing Republicans knew it needed to be included to pass.

The prospects for a special session have improved, as state leaders met last week and set a goal for an August special session. Peterson said he expects there to be a special session; however, he anticipates it will only address a tax bill and bonding bill, not much-discussed transportation funding.

But one thing is clear to Peterson after this session: The state needs to look at how it does business, as its standards and procedures have drifted far from the normal way of doing business.

“We are experiencing a pretty significant drift in terms of disfunction, and it is becoming more and more pronounced,” he said. “And we all, you all, are the victims of this. There are a lot of important projects that need to get done.”

But without a bonding bill and transportation funding, the cities are left behind.

“These wastewater projects are hugely important,” he said. “They’re tremendously expensive for local communities to take on by themselves. The state needs to step up and help.”

“There’s not a lot of levers other than shame, but I’m also a firm believer that shame can also be a very powerful lever to use,” Peterson said.

And at the end of the session, Peterson didn’t point fingers at one party for derailing the bill — he left that up to each person.

“Who killed the bonding bill? I’ll leave that for you to decide,” Peterson said, joking he would talk about it more in the bar later.