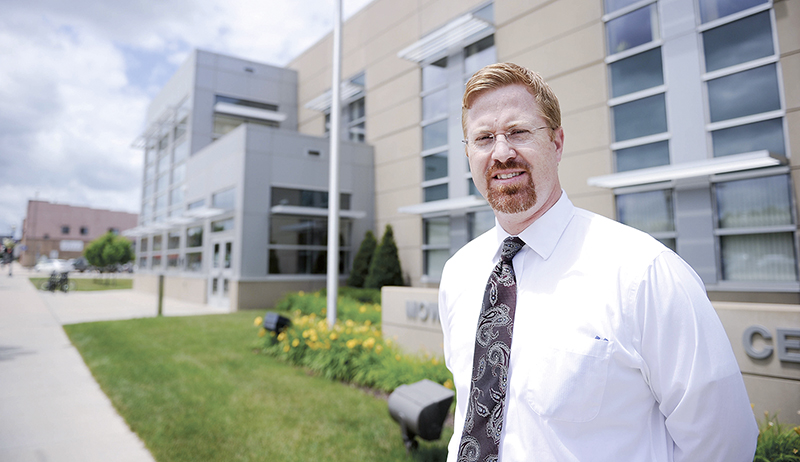 Jeremy Clinefelter, with the Mower County Attorney’s Office for 13 years, is leaving the post to become a public defender. - Eric Johnson/Albert Lea Tribune

AUSTIN — The Mower County Attorney’s Office has big shoes to fill as its lead criminal attorney is taking a new job after 13 years with the county.

Assistant Mower County Attorney Jeremy Clinefelter, who has served as lead criminal attorney, is working his last day with the county Wednesday before he begins working at the Donnelly Law Office. He will also have a part-time contract with the Minnesota Public Defender System, where he’ll be assigned primarily to Freeborn County for criminal defense work.

“It’s quite different,” Clinefelter said. “It’s the exact opposite as a defense attorney, you’re representing a single client.”

While working for the county, he charged people with crimes, worked closely with law enforcement and tried cases.

“The prosecutor is charged with a greater duty to the criminal justice system as a whole,” Clinefelter said. “A defense attorney, in contrast, has the sole responsibility of being a zealous advocate for their client.”

When he first started out at the county attorney’s office, he was assigned misdemeanor and juvenile delinquency files and then eventually climbed the ladder to child protection cases until he reached felony-level cases in 2005 and took those on full time in 2006.

He also handled appeal cases, which he hopes to continue because he enjoys that kind of work and it’s a “fairly particular specialized skill set.”

He said the switch comes for a variety of reasons, including a larger pay scale. Mower County has a 10-step pay scale and once you reach the top, you’re capped, he said. It largely contrasts with the public defender’s office or Olmsted County, which has 20 steps total once someone gains more experience.

But for the most part, he’s still practicing criminal law — though he’ll handle a variety of different cases, including family law.

Clinefelter said he’ll miss the people in the county offices.

“The people in Mower County are very special throughout the criminal justice system, the courthouse and in the other building as well,” Clinefelter said. “Over the years, I have gotten to know a lot of different people at the county and they’re very dedicated, hardworking … public servants.”

Mower County Attorney Kristen Nelsen said it’s like a family in her office.

“Working with him has been amazing for all of us,” she said. “He’s been a real resource for newer attorneys.”

Clinefelter handled complex litigation, the most serious trials and appellate work for the county, she added.

“I’m not sure I could even quantify his contribution,” Nelsen said. “He’s an amazing trial lawyer. We’re really sorry to see him go.”

But help is on the way for the office. On Tuesday, the Mower County board approved offering Clinefelter’s position to an attorney with $82,641 — or step nine on the salary scale.

Nelsen added they wished Clinefelter well and looked forward to having someone come in and move forward.

“When you switch to something different, it’s exciting and energizes you, … so I’m looking forward to the challenge of thinking about cases strategically from a different angle and seeing how that will work,” Clinefelter said.

When he first started, he told the Mower County Board it could count on him for five years. He said it wasn’t a decision he made lightly, but it was the best decision for his career.

“It … evolved into us staying and (we) consider ourselves a part of the community,” he said. “(I’m) leaving on good terms and the board was very kind to give recognition for my service.”

Clinefelter lives in Austin with his family and has a Juris Doctor from Hamline University.