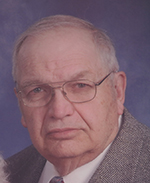 He was born Oct. 17, 1936, in Byron Township, the son of Olof and Elsie (Drache) Strenge. He attended Berlin No. 70 country school and Ellendale High School graduating in 1954. He enlisted in the United States Army and was stationed at Fort Knox, Kentucky. In 1958, while on leave, he married Nadine Olson, a neighbor whom he had first asked to marry him when they were both six years old. After his discharge later that year, he and Nadine returned to Minnesota and farmed for many years near Ellendale, not far from where they grew up.

Dale was a lifetime member of Zion Lutheran Church until three years ago when he joined Community Lutheran Church in Geneva, where he and Nadine had been living since 2003.  Dale had an abiding faith that was nurtured and deepened through his church family and his active involvement in Via de Christo Christian Community. He was an avid woodworker, creating many pieces of furniture for family and friends. Since he could fix almost anything, he often received phone calls asking for help. Dale enjoyed Bible studies, reading and fishing. He volunteered with Habitat for Humanity and served on the Zion Lutheran Church building committee and as sexton for the church cemetery.

He is survived by his wife, Nadine, of Geneva; daughters Judy Strenge of Stewartville, Barbara Strenge of St. Paul and Kristine (and Richard)

He was preceded in death by his sister-in-law, Bernice (and Kenny) Patterson; brother-in-law, Ellsworth “Sam” (and Lillian “Lil”) Olson; and grandson, Justin Schumacher.

Dale’s family extends their deeply felt gratitude to the New Richland Care Center and Albert Lea Hospice for the compassionate and professional care given to Dale and his family.