Funeral services for David Hutchins will be at 3 p.m. Saturday, July 9, 2016, at Bonnerup Funeral Service chapel in Albert Lea. The Rev. Kent Otterman will officiate. Visitation will take place from 5 to 8 p.m. Friday at the funeral home, and again one hour prior to the service at the church. 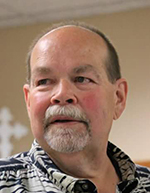 On March 18, 1999, he was united in marriage to Joanne (Waller) in Fluvanna, Virginia. The couple lived in Albert Lea and later Northwood, Iowa.

As a boy, David loved hanging out at his dad’s Shell gas station with his brothers and friends.  As a young man, he was a member of the Scavengers Car Club. David hand an innate talent for all things mechanical as well as design and carpentry. David built dragsters and custom cars.  He also built and remodeled several homes. David helped design the original building that is now Bonnerup Funeral Service.

David worked for more than 50 years in the auto repair industry. He won many national service awards that included trips to Germany and Hawaii. After his retirement from Motor Inn, he enjoyed working with Mark and Dan at Sanderson Auto. Above all, David loved spending time with his family, especially his daughter and granddaughter.

He is preceded in death by his parents; grandparents; brother, Tim Hutchins; nephew, Grant Edwards; and a mother-in-law, Wilma Waller.