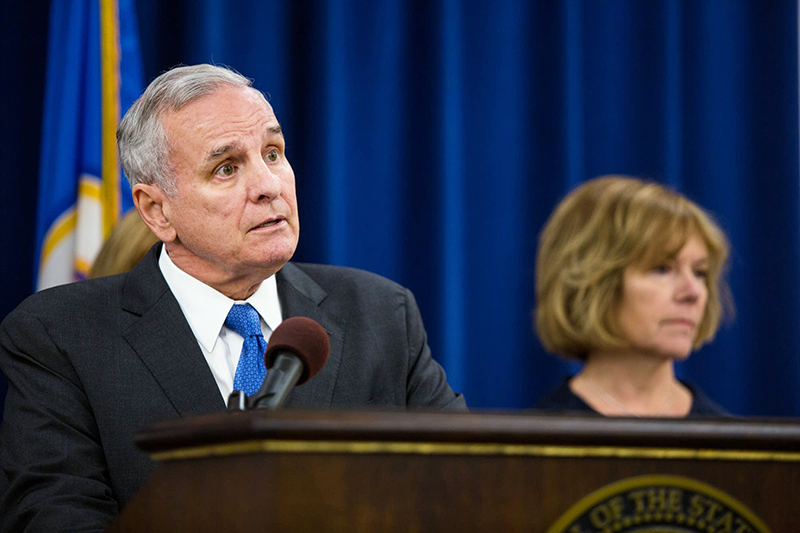 By Brian Bakst and Tim Pugmire

Gov. Mark Dayton called the police shooting of Philando Castile a “terrible tragedy” that has befallen all of Minnesota and said he believed Castile would not have been shot if he was white.

In remarks that were extraordinarily forceful and unguarded, Dayton said Thursday afternoon that he was heartbroken for all Minnesota and “deeply offended” someone in his state would be shot and killed after being pulled over for a broken taillight.

“Would this have happened if those passengers, the driver and the passengers, were white? I don’t think it would have,” Dayton said. “So I’m forced to confront, and I think all of us in Minnesota are forced to confront, this kind of racism exists and that it’s incumbent upon all of us to vow that were going to do whatever we can to see that it doesn’t happen, doesn’t continue to happen.”

He acknowledged that more facts needed to be gathered and said he wasn’t passing final judgment, “but there’s every indication in this case the police response was way in excess of what was called for.”

Castile, an African-American man, was shot by a St. Anthony officer during a traffic stop Wednesday night in Falcon Heights with much of the bloody aftermath captured in video live streamed by Castile’s girlfriend, Diamond Reynolds, who was in the car with her young daughter. In the video, Reynolds can be heard saying Castile was licensed to carry a weapon, that he told the officer he had a gun and was just trying to get out his ID when he was shot “for no apparent reason.” She says the traffic stop was over a broken taillight.

Flanked by Minnesota Public Safety Commissioner Mona Dohman, Dayton said the Castile investigation was the top priority of the state Bureau of Criminal Apprehension. He said he’d also talked to top officials at the White House and United States Justice Department about the matter and was pressing for a federal investigation.

Dohman said BCA agents were working to interview the police officer who shot Castile and would release the officer’s name and other public information once interviews were completed. Once the BCA conducts its probe, it will turn its findings over to Ramsey County Attorney John Choi who’ll weigh the investigation as he considers bringing charges.

The press conference capped an extraordinary day in Minnesota that saw Dayton earlier stand side by side outside the governor’s residence with protesters who’ve ripped him in the past.

The NAACP invited Dayton to speak at its press conference outside the governor’s mansion, where protesters started gathering early Thursday morning. After waiting his turn to speak, the governor offered his sympathy to Castile’s family and friends and said he’d do everything he could to ensure a thorough investigation.

Still, his words might not do much to soothe the protesters. Some heckled the governor during his remarks Thursday morning.

Pastor Danny Givens of Above Every Name Ministries in St. Paul turned directly to the governor to say he couldn’t appreciate anything he said. It was Givens’ third time demonstrating outside the governor’s mansion, the pastor said.

Rashad Turner, an activist with Black Lives Matter in St. Paul, also took aim at Dayton. Turner is challenging DFL state Rep. Rena Moran in the primary election next month. But his legislative aspirations didn’t stop him from some pointed name calling directed at the governor.

“I might have just lost a few votes. But I don’t give a damn, because I’m tired of sitting back, listening to you as a white supremacist telling us our lives don’t matter,” he said.

Reynolds, Castile’s girlfriend, and his uncle Clarence Castile directed their criticism at the police rather than the governor.

Reynolds, who was in the car with her young daughter during the shooting, said she was devastated. “Not one shot. Not two shots. Not three shots. Not four shots. But five shots, for no reason.”

It’s unclear how long protesters plan to stay outside the governor’s residence. After the fatal police shooting of Jamar Clark in November, demonstrations outside Minneapolis’ 4th Precinct police station lasted two and a half weeks.