Donald Gene Hoes, 82, of Albert Lea, formerly of Perry, Iowa, passed away Monday, July 4, 2016, following a valiant eight-month fight against pancreatic cancer. A memorial service will be at 11 a.m. Saturday at United Methodist Church in Albert Lea. Visitation with family will be one hour prior to the service at the church. Don had registered long ago to donate his body to Mayo Clinic for research. Interment will occur at a later date at Violet Hill Cemetery in Perry. 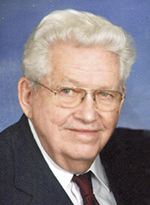 In 1953, Don was drafted into the United States Army. He served two years on bases in Bangor, Maine, and El Paso, Texas, working as an artillery mechanic. He was honorably discharged in 1955.

Don’s father had been a career railroader serving in Perry as roundhouse foreman for the Milwaukee Railroad. Don followed in his father’s footsteps joining the Milwaukee Railroad in Perry in 1955 following his military discharge. He worked first as a fireman, eventually becoming a full-time engineer for over 40 years. When the Milwaukee line closed in Perry, Don transferred to the Milwaukee /Soo Line in Ottumwa, Iowa, where he and Ann lived for 15 years.

When Don wasn’t driving trains, he was busy gardening. His mother had grown beautiful flowers and he inherited his green thumb from her. Besides flowers, Don grew and gave away many vegetables from his plots at the Albert Lea Community Garden.

Don also loved fishing. Beginning in 1948, Don and his father and other railroaders/Perry friends made annual fishing trips to Sioux Lookout and Sioux Narrows, Canada, on Lake of the Woods.  In 1998 Don and the friends from around the U.S. he’d met fishing celebrated their 50th anniversary of the Labor Day trip. Don’s son, Eric, joined them in 1973, making three generations of Hoes fishermen until 1980 when Don’s father died. Eric and Don continued the tradition through last year’s trip.

When Don wasn’t railroading, gardening or fishing, he was probably in his shop fixing something for family or friends. Don loved being helpful and could often find an inexpensive solution for whatever wasn’t working right. He also loved loaning people some of his tools and stuff to do their own work. Family would joke that if someone asked to borrow something and Don didn’t own it, he’d run out and buy it just so he could loan it to whoever had asked.

Don retired in 1995, when Ann and Don moved to Albert Lea. During their working years and in retirement Ann and Don also did much traveling, fishing in Branson, Missouri, and traveling around Iowa and Minnesota with trips to Colorado and Florida in their RV. They traveled to see elderly aunts in Arizona and California many winters. Their big trip was a six month RV trip to Alaska, California and Colorado. But August was always reserved for camping among the throngs at the Iowa State Fair in the same campsite for over 35 years.

Don was diagnosed with pancreatic cancer in October 2015. After six weeks of chemotherapy and radiation, he enjoyed one last trip to Florida to see his son, Eric, and wife, Teresa. Don entered hospice in Albert Lea April 15. Don and family members felt very blessed by the nurses, aides and volunteers in the hospice program, as well as by the support of their family, friends and church family. In his final days, Don transferred to Thorne Crest Senior Living Community for extra help before he peacefully passed away with Ann by his side.

Don and family ask that in lieu of flowers, any memorials be given to United Methodist Church in Albert Lea or to Mayo Clinic Cancer Research.