Dora was born Aug. 25, 1915, near Manchester.  She was baptized and confirmed in West Freeborn Lutheran Church.

Dora and Herman Hallum were united in marriage in the chapel in Hartland. They farmed south of Manchester for 13 years before moving to an acreage south of Oakland. They then purchased a home in Austin, where they lived for more than 50 years. Dora and Herman were a team. They built custom cabinets for kitchens, bathrooms, etc., as well as other carpentry work in the Austin area. Vacations often found them searching for agates on northern Minnesota shores. They cut and polished the stones, creating small pieces of jewelry with them. 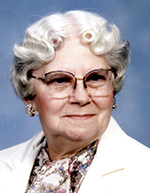 Funeral services will be at 11 a.m. Thursday at Oakland Lutheran Church. Visitation will be one hour prior to the service at the church.

Dora’s family would like to give a special thanks to the staff at Good Samaritan Society for their kindness and patience in the last 15 months of her life, when she could no longer live in her own home.