Funeral services for Elaine E. Knutson of Northwood will be at 6 p.m. Tuesday at Bonnerup Funeral Service in Albert Lea. The Rev. Kent Otterman will officiate. Visitation will be from 5 to 6 p.m. Tuesday at the funeral home. Interment will follow at Silver Lake Cemetery.

Elaine was born Jan. 18, 1929, in Northwood, the daughter of Oscar and Clara (Hengested) Egland. She was a graduate of Northwood High School. On May 1, 1949, she was united in marriage to Harold Knutson at Silver Lake Church. 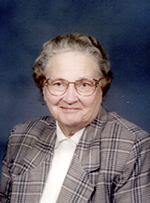 Elaine was a homemaker and worked with her husband in the Standard Oil business. She was an active member of Silver Lake Lutheran Church and in her free time enjoyed making lefse, pontoon boating at Clear Lake, Iowa, with friends and trips up north to Leech Lake. She was also a dedicated caregiver to her parents.

She was preceded in death by her parents; son, Ronald Knutson; and sister, Carol Emmons.