Pater was charged after Minnesota Department of Corrections agents and a Freeborn County Sheriff’s Office deputy conducted a home visit of David Neely June 23 in Alden at a residence he shared with Pater. 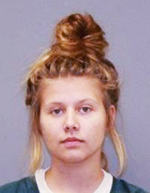 Pill bottles were found to contain lorazepam and oxycodone, three baggies were reportedly found with methamphetamine, and a small torch and a lighter commonly used to smoke meth were found at the residence, court documents state.

As the search went on, Pater and Neely — who were reportedly in a relationship — argued about who should take responsibility for the items, court documents state.

Pater has a contested omnibus hearing scheduled for Sept. 1.