Memorial services for Ervin will be at 11 a.m. Monday at Trinity Lutheran Church in New Richland. The Rev. Paul Andree will officiate. Visitation will be one hour prior to the service at the church. Military honors will be accorded by New Richland area veterans.

Ervin was born Oct. 28, 1929, to Henry and Katherine (Wiekum) Himmerich in Linton, North Dakota. He married the love of his life, Bernice Jensrud, on July 3, 1949, in Esmond, North Dakota. 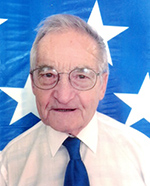 In October 1945, Ervin entered the Navy and served for two years. After discharge, Erv started working for Land O’Lakes at the hatchery in Valley City, North Dakota, for six years. For the next 13 years, Erv worked at Shetlers Hatchery in Thief River Falls. He then came to work at the egg plant in New Richland for 14 years. Erv held custodian jobs at the New Richland School District and the bank in his later years.

Ervin enjoyed being involved in church council over the years, traveling with family and woodworking in his spare time. He even made each granddaughter a cedar chest.