Gary L. Clancy “Clancy” died Wednesday, July 27, 2016, at his home after a brave, 12-year struggle with non-Hodgkins Lymphoma. He was lovingly cared for by his family and friends under the direction of Seasons Hospice. 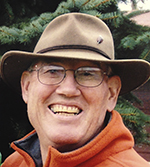 He married Nancy D. Boughten on June 10, 1972. The couple celebrated 44 years of marriage this year. The couple lived in Albert Lea, Byron and High Forest. During their marriage they welcomed three daughters: Michelle Marie, Kelli Jo and Katie Elizabeth, and four grandchildren.

Gary was fortunate to pair his love of the outdoors with his skill in writing. He made a wonderful career as a prolific outdoor writer, sharing his love of the outdoors, his family and his life through thousands of weekly articles for the Minnesota Outdoor News, as well as in the Rochester Post Bulletin. He wrote for numerous national publications and authored eight books. He was devoted to his Catholic faith. He was admired for the love he gave easily to his family. His infectious positivity, approachable and humble personality and awesome laughter will be fondly remembered and missed.

He was an active member of Alcoholics Anonymous for 37 years and celebrated 37 years of continued sobriety. His home groups were Tradition 3 and The Third Ave. Thursday Morning Men’s Group.  He enjoyed many hours on the golf course with his Soldiers Field golf group. Fishing the lakes and rivers of Minnesota was second only to his love of the whitetail deer.

He was preceded in death by his parents; an infant brother, Jeffrey; and his brother, Michael D. Clancy.

In lieu of traditional flower bouquets, the family would appreciate fresh from your garden bouquets. In lieu of flowers, please consider a donation in Gary’s name to Pheasants Forever, The School of South Sudan or Seasons Hospice.