Memorial gifts may be directed to the Bethel Lutheran Church cemetery fund.

Helen Flora (Westendorf) Pederson was born June 11, 1921, to Ben and Ella (Alberts) Westendorf in Grant Township in Winnebago County in Iowa. She grew up and attended school in Lake Mills. Helen was confirmed at North Prairie Lutheran Church near Scarville.

Helen married Leslie Pederson Sept. 23, 1938, at Lime Creek Parsonage in Scarville. They farmed in the Scarville and Leland areas. In 1950 they moved to a farm near Vinje, where they lived until 1977. Helen retired with her husband to Kiester, where they lived for 25 years and later moved to Albert Lea. She lived in Cambridge since 2010 to be near her daughters. She was a member of Bethel Lutheran Church near Vinje. 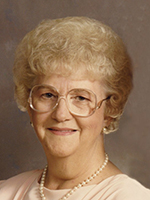 Helen was a kind and loving person to all who knew her. She enjoyed the fellowship of the women of her church and used her cooking skills for many events in the life of the church. Along with these women she learned to quilt and quilting became a favorite past time. She was an avid gardener in the summer and enjoyed growing African violets indoors year around. She was a great baker and the aroma of her fresh doughnuts and pastries filled the entire house most Saturdays.

Helen was preceded in death by her parents; her husband, Leslie; her five sisters, Minnie, Frances, Alice, Ann and Jeanette; her brothers Bennie and Ray; her son, Gerald; and her daughter, Kathleen.

She is survived by her children David (Diane) Pederson of Bloomington, Nancy (Robert) Youel of Blaine, Randy (Ann) Pederson of Grand Forks, North Dakota, and Lorie (Bob) Callen of Cambridge; and four grandchildren, Erin and Leslie Pederson and Stephen and Kate Callen. She is also survived by many nieces and nephews.