Funeral Services for Irene J. Thompson of Albert Lea will be at 11 a.m. Wednesday at First Lutheran Church in Albert Lea. Interment will be in Hillcrest Cemetery. Visitation will be one hour before services at the church. Bonnerup Funeral Service is assisting the family.

She was born on Aug. 1, 1922, in Austin, the daughter of Everett and Lucy (Yarwood) Subra. Irene, the oldest of nine children, grew up on multiple farms in the Austin area. 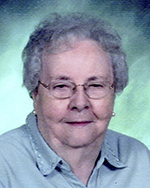 She was united in marriage to Simon S. Thompson on Jan. 28, 1956, at The Little Brown Church in Nashua, Iowa. In 1960, the couple moved to Albert Lea where they owned and operated Thompson Board and Care for more than 25 years. Irene, a very astute business woman, did the everyday managing as well as cooked all the meals at the board and care.

She was a member of First Lutheran Church in Albert Lea. She loved playing cards, dancing at the Eagle’s Club and was an avid Minnesota Twins fan. A nature lover, Irene enjoyed birds and dogs.

She was preceded in death by her parents; her husband, Simon; brother, Roger Subra; and sister, Violet Bicknese.

Irene will be kindly remembered for her easy going nature and the way in which she lifted others spirits.