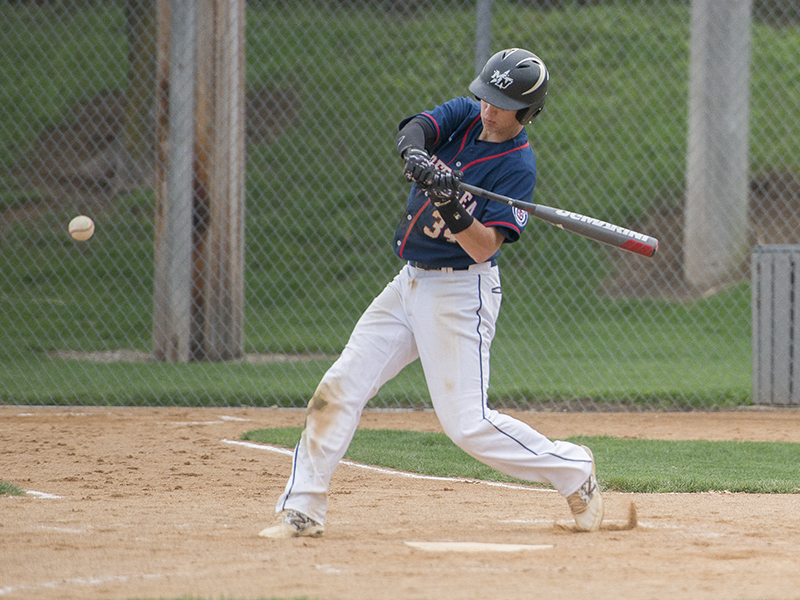 Baseball is a game where a hitter can fail seven out of 10 times and still be considered successful.

It really doesn’t matter the level of play — players will fail more than they will succeed.

For Jake Thompson, he has learned a lot from playing baseball over the years, and it has turned into more than just a game for him.

It has turned into his life.

Growing up, Thompson learned the game from his dad, Stan, who also coached him starting at the age of 9. Stan Thompson played at Augsburg, and some of that knowledge he acquired over the years sewed some seeds for Thompson so he could learn, too.

“I’ve played baseball since the time I started to walk,” said Thompson. “I was lucky enough to have my dad as my coach when I was growing up. We had a lot of fun times, played a lot of games and learned the fundamentals.”

Thompson used what his dad taught him, and turned it into an extremely successful high school baseball career.

Joe Sczublewski just finished his 28th year as head coach at Albert Lea, and he remembers the time he called Thompson up to the varsity team.

“We thought we’d give the guy a look,” Sczublewski said. “There really wasn’t much to lose.” 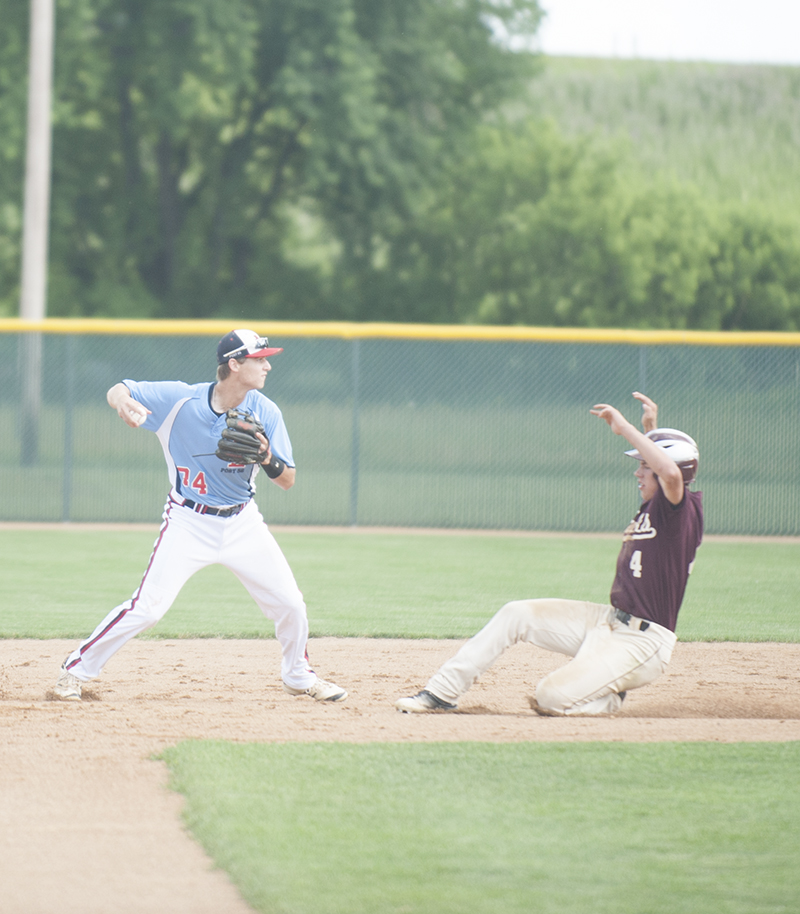 Thompson turns a double-play in a recent Legion game against the Rochester RedHawks in June. Jarrod Peterson/Albert Lea Tribune

It took Thompson a little while to figure out the game and adjust, but his hard work during the offseason helped make the transition easier, and he developed into one of the best shortstops to ever play for Albert Lea.

Over the course of the next three years, Thompson grew several inches, put on a lot of muscle, took thousands of practice swings in his batting cage his parents bought him for his 16th birthday and spent every waking moment thinking, practicing or playing baseball.

He improved to the point where the mental aspect of the game became something that didn’t bug him.

“The mental part of baseball is the toughest,” Thompson said. “I got down on myself a lot when was I younger. I grew up seeing every pitch as a battle, which it is, but I put a lot of pressure on myself.”

During the summer, while he was traveling all over the country, Thompson’s coach told him something that helped relax him.

“I was really struggling that summer,” Thompson said. “My coach told me I was overthinking the game, that I needed to relax.”

With that in mind, Thompson returned to Albert Lea, and quietly went about his business. A kid who doesn’t seem to say too much and models himself after his favorite baseball player, Joe Mauer, worked his way onto the Big Nine All-Conference team as a junior.

He helped lead the Tigers to the section championship game, where they came up just short of making an appearance in the state tournament.

That was something that stuck with Thompson during the summer and winter months.

“It was tough,” Thompson said. “Knowing you were so close only to come up short was not a lot of fun.”

Again, Thompson went back to work. Focusing on the fundamentals, and spending hours working on his swing and footwork.

Perhaps the biggest thing Sczublewski noticed was his improvement in his focus and concentration.

“It’s admirable and a testament to him,” Sczublewski said. “Everyone knows baseball is a game of failure. Playing shortstop, a player gets so many chances, and mistakes are going to be made. (Jake) has the ability to wipe it off and doesn’t let the mistakes fester. He has great hands and feet, and he has built up his strength to where he can drive the ball to any part of the field. He has turned himself into a great player.”

Thompson makes his way toward the batting cage as a member of the Albert Lea Lakers before Thursday’s game against the U.S. Military All-Stars.

The Tigers entered this season with a solid group of veteran players who had experienced a lot of success the past few seasons, and Thompson wasn’t shy about leading the way.

While the Tigers didn’t get off to a blazing start, Thompson’s even-keelness helped level a 3-6 start, and the Tigers turned the corner as the calendar flipped to May.

“We got off to a rough start,” Thompson said. “We lost some leads late in some games and we were missing some guys. But that’s baseball. We started to get things rolling in May. We got guys back and that added depth to our lineup. Guys were ready to go. We played for each other.”

What followed was a groundswell of victories. The Tigers would win nine of their next 11 games, one after another, including a sweep all three Rochester schools — Mayo, John Marshall and Lourdes — and a walk-off victory — courtesy of a Thompson triple — at home against No. 1 Mankato West.

The turnaround midway through the season perhaps led to what happened once the season was over, when Thompson was named Big Nine Conference Player of the Year, the first one for Albert Lea since Aaron Klatt in 2011 and only the second in the school’s history.

In addition to being named Player of the Year, Thompson took home All-Conference and Academic All-State honors, the second time that has happened in his career.

But the biggest honor was being named the Big Nine’s best player.

“It was extremely humbling,” Thompson said. “A lot of players and coaches, mostly previous coaches I have had, reached out to me right away to congratulate me. I am proud of the award because it shows me all of my hard work has paid off and means something. I’m most thankful for my parents, who gave me a lot of opportunities to play and improve, and my grandparents for supporting me and coming to a lot of my games.”

With his team on a roll, Thompson and the Tigers took to the playoffs to see if they could finally crack the egg and make it to the state tournament in June.

It didn’t start off well. A loss to rival Austin sent Albert Lea to the loser’s bracket.

But, like the resiliency the Tigers showed in the beginning of May, they battled back.

The Tigers would have to win two games to go to state. Thompson and the Tigers’ offense was hot in the first game, winning 9-6. But they ran out of gas in the second game, coming up one game short for the third year in a row.

“It was so sad to see it end,” Thompson said. “It was sad for me, the other seniors, the coaches and the rest of the guys on the team. We had a really good year and made a great run in the playoffs. It’s just frustrating to come up short, again. I’ll never forget this group and what we accomplished, though.” 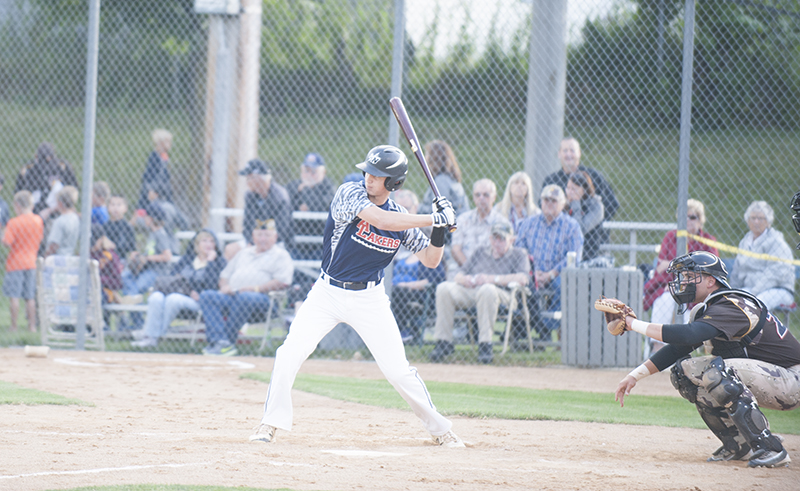 Thompson readies himself to take a swing during the U.S. Military All-Star game Thursday night at Hayek Field. He finished the game 2-6.

However, like he did just a few years ago when he was struggling during traveling baseball, Thompson will learn from this experience and it will make him better.

Along with his honors, Thompson was named one of the top seniors in the state of Minnesota, and was invited to participate in the Minnesota State High School Baseball Coaches Association All-Star Game in June.

He had quite the series, too, going 4-5 with three doubles and a game-winning hit in one of the games.

“It was a great experience for me,” Thompson said. “I was able to meet up with some old friends and make some new ones.”

The recognition didn’t stop there.

On Thursday, he, along with teammates Mason Hammer and Parker Mullenbach, played for the Albert Lea Lakers against the U.S. Military All-Stars, and he went 2-6 in the game.

“It was a tremendous honor to play and honor our veterans,” he said.

This coming week, his Legion team will begin its playoffs.

As his summer winds down a bit, Thompson will have a week or two to relax for the next big step in his life — college.

He will attend South Dakota State University on a baseball scholarship.

“I’m excited for the new challenge,” he said. “I love to compete, and going to SDSU is going to be a lot of fun for me. It’ll be something new, a little change of scenery.”

One thing is for sure: Sczublewski thinks Thompson has readied himself for the next level.

While in school, Thompson plans on studying biology with the hopes of becoming a doctor.

But the athlete in him will do anything he can to get the next level.

“I want to play baseball at the highest level possible,” Thompson said. “If that means  only getting to play low-level pro ball, that’s what I want to do. Going to school is important, but it’s not going to deter me from trying to become a pro ball player.”

It might seem like a pretty lofty goal, but Thompson was taught by his family to reach just a bit further.

“My parents have always told me that if other people aren’t laughing at your goals, then your goals aren’t high enough,” Thompson said.

“I’ll miss all the late nights me and friends spent playing wiffle ball games,” Thompson said. “I’ve created so many memories here. My teammates are my closest friends. It’ll be hard knowing I’ll never get to play with them again. I’ll stay in contact with them, though.”

Thompson has grown from a kid who liked to sing in the car during driver’s ed to a young man who turns double-plays. While he is destined for bigger and better things in life, Thompson certainly won’t forget the impact Albert Lea has had on him.

“I love this place,” Thompson said. “Too many good people and memories for me to forget it.”