Funeral services for Jeanette R. Stieler McIver of Albert Lea will be at 10 a.m. July 30 at Bonnerup Funeral Services. The Rev. Todd Walsh will officiate. Visitation will be one hour prior to the service from 9 to 10 a.m. Interment will be at Graceland Cemetery.

Jeanette died on Sunday, July 10, 2016, at Thorne Crest Senior Living Community in Albert Lea. She was 99. 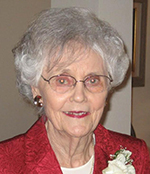 Jeanette was born Feb. 12, 1917, in Crookston, the daughter of Oscar A. and Rose J. (Clewett)Halvorsen. She graduated from Crookston High School in 1935 and from the University of North Dakota in 1939 with a Bachelor of Science degree in commerce. She was a member of Delta Gamma sorority.

After graduation, Jeanette worked as a buyer at Dayton’s department store in Minneapolis. Later, she worked at the New England Furniture Company. She sold Whitney maple furniture and decorated model homes for the company.

Jeanette was united in marriage to Philip Stieler on Oct. 29, 1942, in Seattle. They resided in Medford, Oregon, until his departure with the Army for the South Pacific in World War II. She returned to Minnesota to work in her father’s store in Crookston. Philip passed away in 1989. Jeanette was married to Lawrence McIver on June 22, 1996, in Albert Lea. They spent many of their winters in Sun City West, Arizona. Larry passed away in 2011.

Jeanette was past president of the Southeast District Dental Auxiliary. She was a member and served on the board of the American Association of University Women. She continued to support the Alumni Association of Delta Gamma sorority. She was a member of Civic Music for years. Jeanette loved playing bridge, antiquing, shopping, decorating, traveling and dancing. She especially enjoyed her time with family.

A very special thanks to the compassionate and caring staff at Thorne Crest Senior Living Community and to close friend, Julie Wallin.

In lieu of flowers, memorials may be made to the United Methodist Church organ voicing fund or to Senior Resources.