A memorial service for John Herbert Schultz, 83, of Albert Lea will be at 11 a.m. Wednesday at Zion Lutheran Church. The Rev. Robert Stohlman will officiate. Visitation will be from 4 to 7 p.m. Tuesday at Bonnerup Funeral and Cremation Services of Albert Lea and one hour prior to the service at the church. A lunch will follow the service and there will be a private interment. 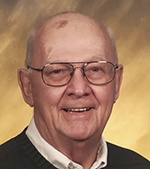 John died peacefully, surrounded by his wife and sons, on Saturday, July 23, 2016, at Good Samaritan Society of Albert Lea.

John Schultz was born March 5, 1933, in Milwaukee, Wisconsin, the son of Walter and Lydia (Krenske) Schultz. He graduated from Lutheran High School in Racine in 1951. After serving as a tank gunnery instructor in the United States Army at Fort Knox from 1952 to 1954, he received his Bachelor of Science degree in physical education in 1958 from Valparaiso University in Indiana; his Master of Science degree in parks and recreation administration in 1961 from the University of Illinois; and his Ph.D. in 1968 from the University of Minnesota. His education and determination led to a rich and fulfilling life, both personally and professionally.

On Aug. 28, 1966, he was united in marriage with Carolyn “Kelly” Dusek of Albert Lea. His son, Daniel, was born in 1967. In 1968, John accepted the role of division chairman in the Recreation, Park and Leisure Studies program at the University of Wyoming. His son Andrew was born in 1969 and the young family stayed in Laramie, Wyoming,  until 1974. Thereupon, he accepted the same position at the University of Minnesota, where he served with honor and distinction as department head until 1989. He retired from full-time teaching and moved to Albert Lea in 1997.

He loved to golf, take road trips, watch and coach sports and was a devoted family man, supporting Kelly, Andy and Dan in their own explorations, activities and families. He was an active church member at Zion Lutheran Church in Laramie, Gloria Dei in Minneapolis and Zion Lutheran Church in Albert Lea and a positive force in every community with which he became involved. In short, he was a good man.

He is preceded in death by his parents Walter and Lydia; and sister, Barbara.

He is survived by his wife of 50 years, Carolyn; sons Dan (Megan) and Andy (Kari); grandchildren Allison and Whitney; sisters Betty, Helen and Karen; twin brother, Richard; and brother, Eric; and many wonderful nieces, nephews, former students, colleagues and friends.

He will be dearly missed, but will remain alive in every heart he touched.