Judy Drager of New Richland died Tuesday, June 28, 2016, at Abbott Northwestern Hospital in Minneapolis. She was 71.

Memorial service will be at 11 a.m. Wednesday at St. Peter Evangelical Lutheran Church in New Richland. Visitation will be from 4 to 7 p.m. Tuesday at church and again one hour prior to the service. Bonnerup-Friedrich Funeral Chapel is handling the arrangements. 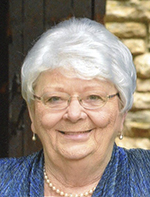 Judith Elaine was born June 13, 1945, in Manhattan, Kansas, to William and Hazel (Halligan) Harvey. She grew up in Kansas and attained her general education degree as well as a beautician’s license. While living in Kansas, she met Dean Drager, while he was stationed there. The pair married on May 8, 1965, in Wamego, Kansas. They made their home in Minnesota.

Judy has held various jobs throughout the area. She worked as a medical transcriptionist in Mankato, at her beauty shop Wishing Well in her New Richland home, Herters, Federated, E.F. Johnson and as a deputy recorder for Waseca County.

Judy was very creative and had a knack for painting, often spending her free time painting pictures and ceramics. She also enjoyed bowling, playing cards and most of all — spending time with her grandchildren, great-grandchildren and family.

Judy was preceded in death by her parents William and Hazel Harvey; and mother and father in-law Edgar and Ida Drager.