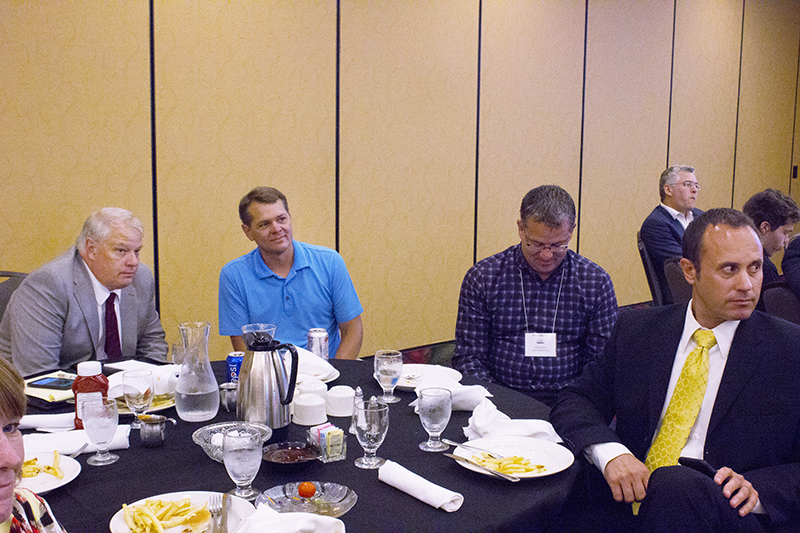 The remarks were made at a discussion between District 4B Rep. Paul Marquart, DFL-Dilworth; and District 18A Rep. Dean Urdahl, R-Grove City, on which party would be more beneficial to Greater Minnesota if in the majority in 2017.

Marquart cited a St. Paul Pioneer Press article that analyzed this year’s votes in the Legislature, noting that though the article found House of Representatives votes were largely partisan, it found that he was one of three legislators who were willing to work across the aisle.

Marquart and Urdahl were each given 15 minutes to speak.

Urdahl cited accomplishments that passed in the last biennium, some of which include addressing rates for nursing home providers and improving access to quality care.

Urdahl also discussed allocating more money for workforce development, broadband, tourism and other areas — all issues he said are important to Greater Minnesota.

Marquart derided the GOP for its proposal to cut $84 million from the LGA program by reducing the amount of aid distributed to Minneapolis, St. Paul and Duluth, and promised that if the DFL returned as the majority party in the Legislature in 2017, it would take an LGA-friendly approach.

Urdahl said the signs are pointing toward a special session to pass a tax bill and a bonding and transportation bill, noting his belief that the third week of August is a reasonable possibility for the session.

Albert Lea City Manager Chad Adams and Mayor Vern Rasmussen Jr. attended the presentation and other parts of the conference.

Adams said the discussions on LGA and workforce housing were positive, noting that Republicans and Democrats signaled they have to work together and acknowledged it has not been happening.

Rasmussen said the conference is important so they can learn from the solutions other cities are using to address their problems.